Azerbaijan, in the Caucuses region, is a country that straddles both Eastern Europe and Western Asia, so expect a clash of east meets west and you will find a lot to enjoy here. Located on the Caspian Sea, there are quaint subtropical seaside resorts, or you can embrace Azerbaijan’s name as the Land of Fire with a trip to a flaming mountain or a mud volcano.

Azerbaijan, in the Caucuses region, is a country that straddles both Eastern Europe and Western Asia, so expect a clash of east meets west and you will find a lot to enjoy here. Located on the Caspian Sea, there are quaint subtropical seaside resorts, or you can embrace Azerbaijan’s name as the Land of Fire with a trip to a flaming mountain or a mud volcano. 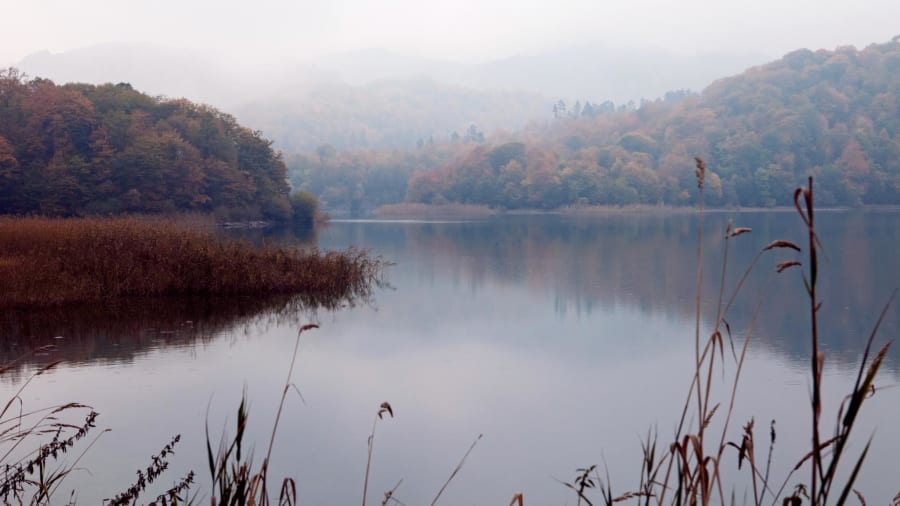 There are hillside towns that hide ancient mosques and minarets, as well as some of the most impressive modern architecture in the world in the form of the Flame Towers in Baku, so whatever your agenda and time restrictions, Azerbaijan has much to offer visitors at the crossroads of Europe and Asia. 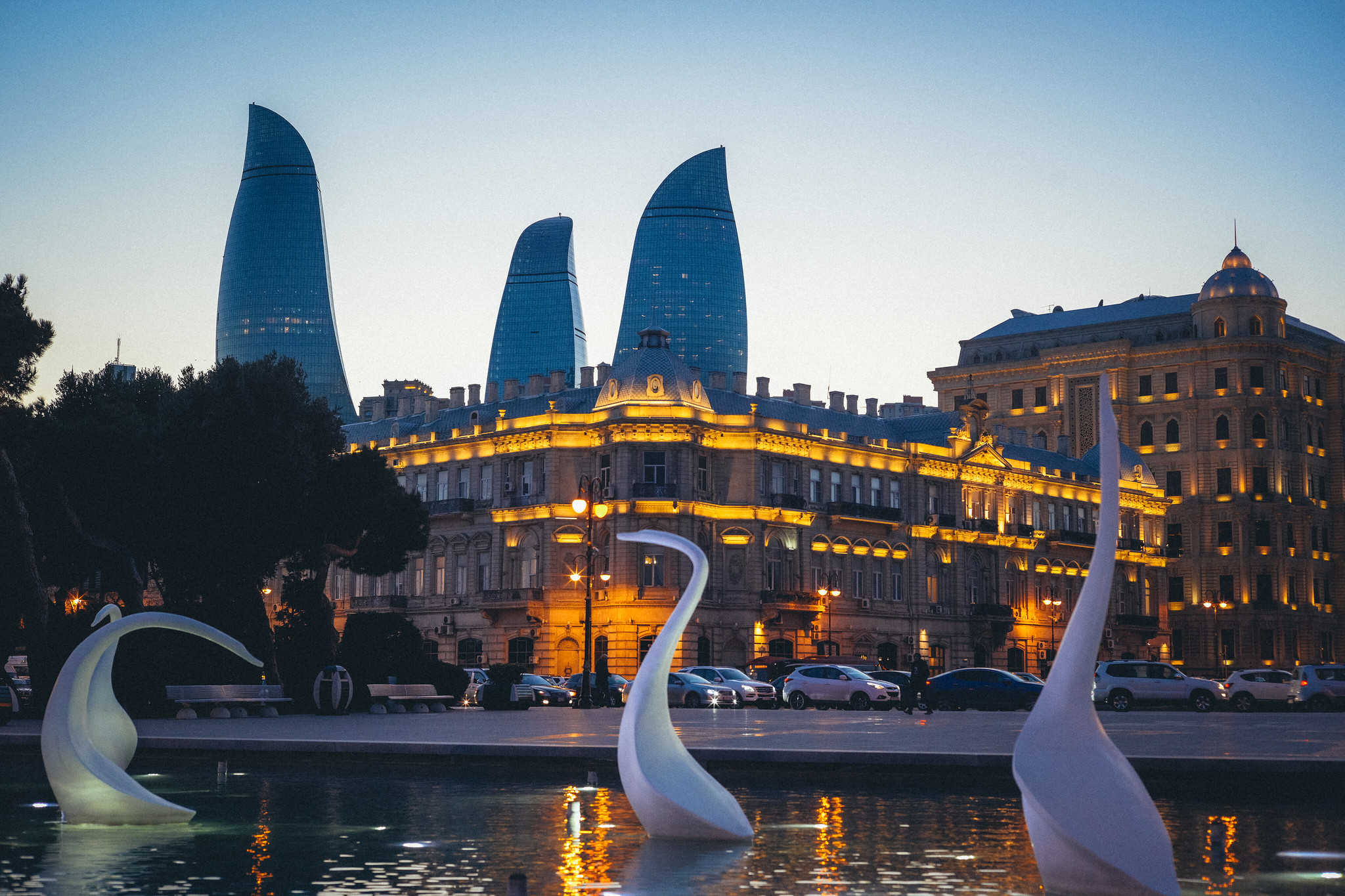 Here are some of the best places to visit in Azerbaijan. From old architecture to the rich culture, these places have everything which the travelers must experience. 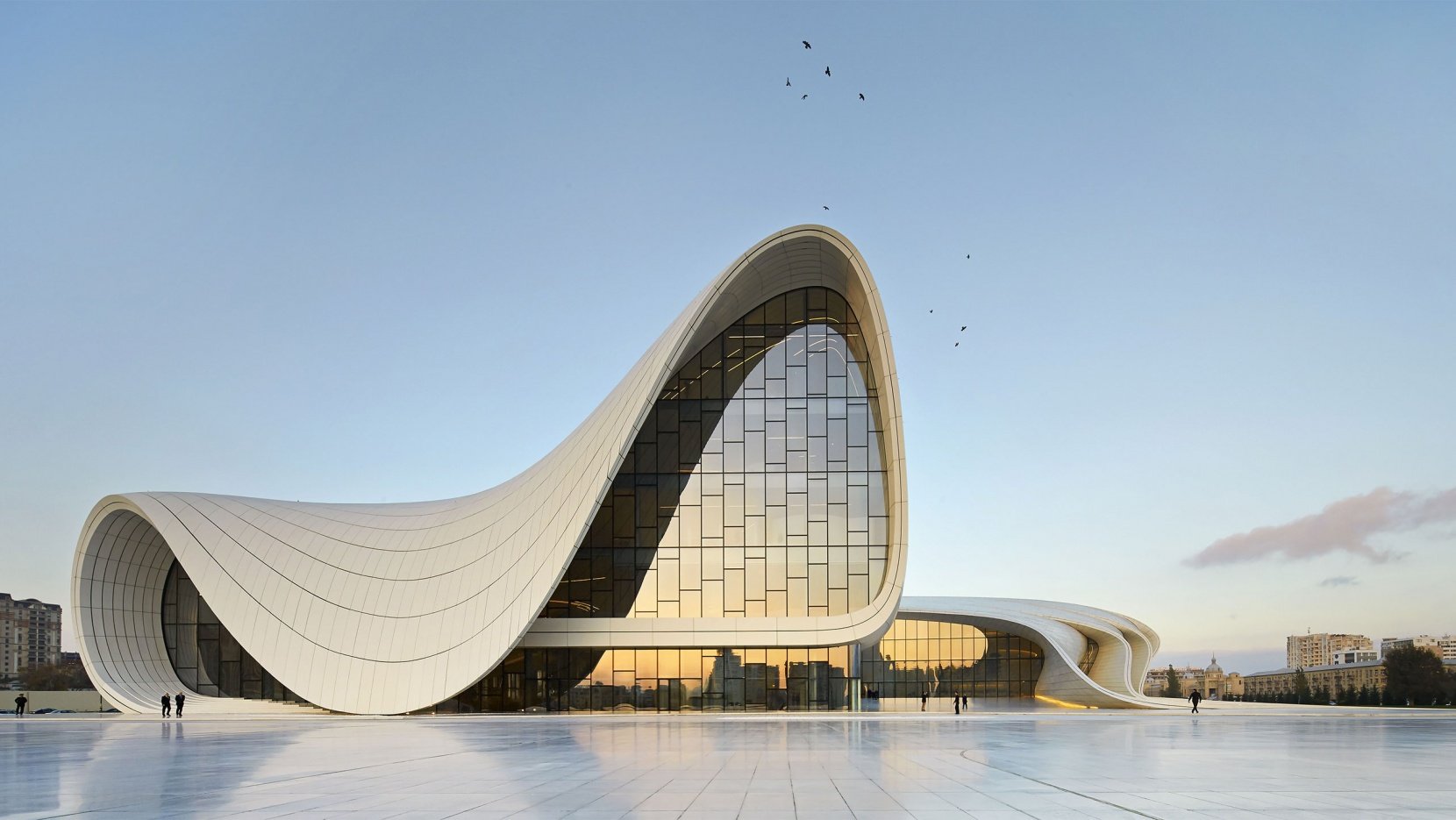 Baku is one of the most beautiful places in Azerbaijan on account of its modern city center and historical old town. The Flame Towers form the focal point of the capital and light up after sundown. Icheri Sheher, the medieval core, exhibits Islamic styles of architecture, while lavish European facades line the Old City. The most beautiful attractions are along Baku Boulevard, a long promenade near the Caspian Sea, and there are superb views from the hill near Martyrs’ Lane.

To read more about Baku: 5 must-see places to visit in Baku 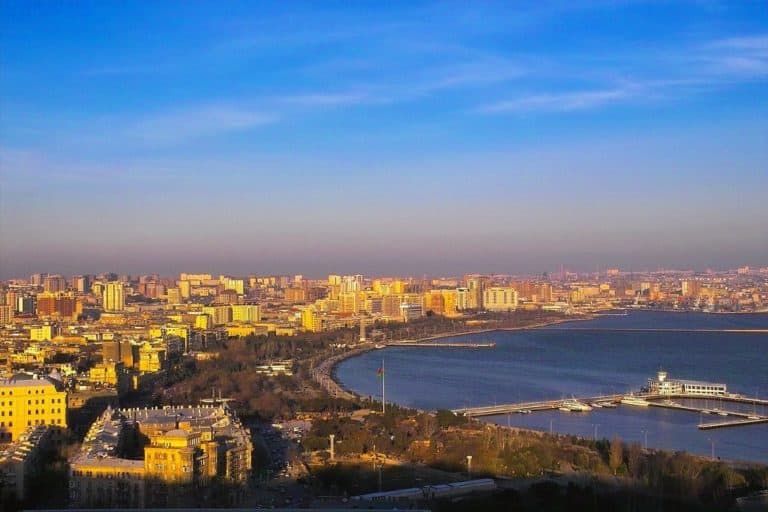 Absheron National Park (Azerbaijani: Abşeron Milli Parkı) is a national park of Azerbaijan in the Caspian Hyrcanian mixed forests ecoregion. It was established on the 8th of February 2005, on an area of 783 hectares (7.83 km2), on the base of Absheron State Nature Preserve. 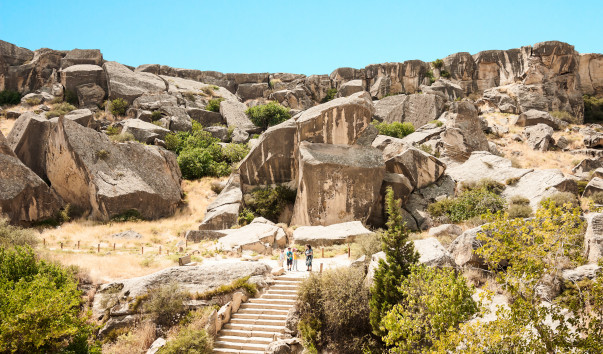 Stand inside and marvel at the rolling dunes against the clear, unpolluted waters of the Caspian. However, the mesmerizing landscapes aren’t the main attraction. More than 50 species of animals call the steppes home, including the endangered Caspian seal and comb jellyfish, as well as gazelles, badgers, and jackals. 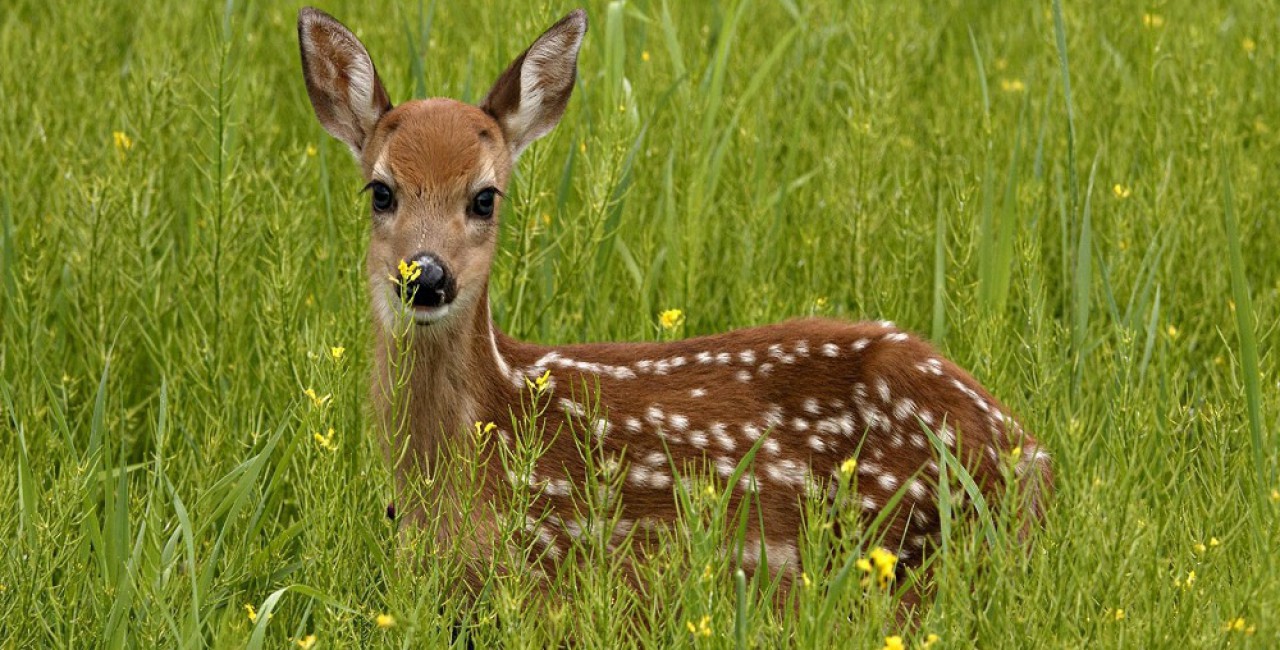 Shirvan National Park, is a semi-desert national park, just over 100km (62mi) southwest of Baku, combines wildlife, dunes, and a short stretch of coastline. In this protected area visitors can enjoy landscapes and a diversity of fauna with large populations of gazelles, jungle cats, and turtles, jackals. For those more interested in birdlife, you will find swans and even flamingos in the park, which tend to congregate around the aptly named Flamingo Lake.  More than 200 species of birds live here. 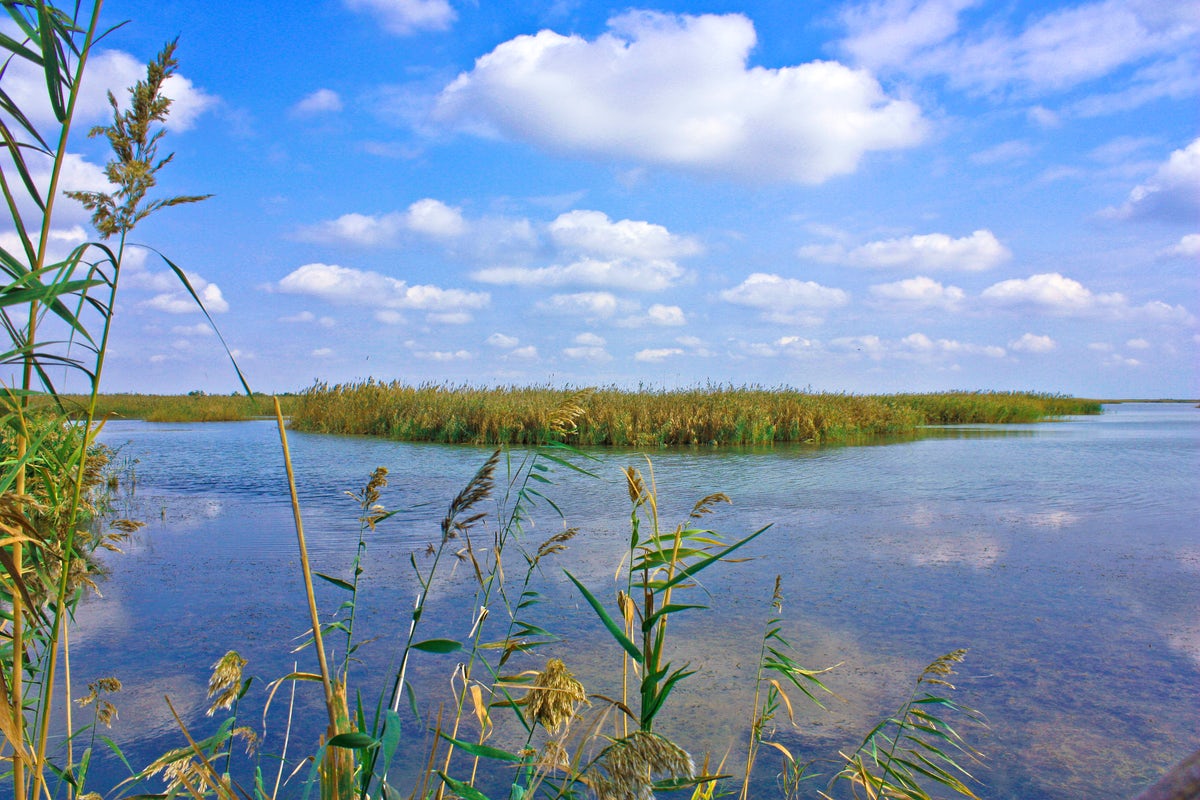 Bungalows and camping sites are available for overnight stays.

Mud volcanoes are also commonly found in the park, the most famous being Bandovan Mountain, which is well worth a visit to take in this amazing natural phenomenon. For those who want to spend time taking in all the natural attractions here, there is accommodation available in the form of quaint bungalows, or, for more adventurous visitors, camping on the northern beach of the park is permitted with a permit.

The city of Astara is located at the Astara Rayon district on the borders of Iran. This place is termed the most beautiful city in Azerbaijan. Mountains surround the town, which sits on the border with Iran, while lush green virgin rainforest and a variety of plant and animal life – including the Caucasus leopard – live in the nearby Hirkan National Park. 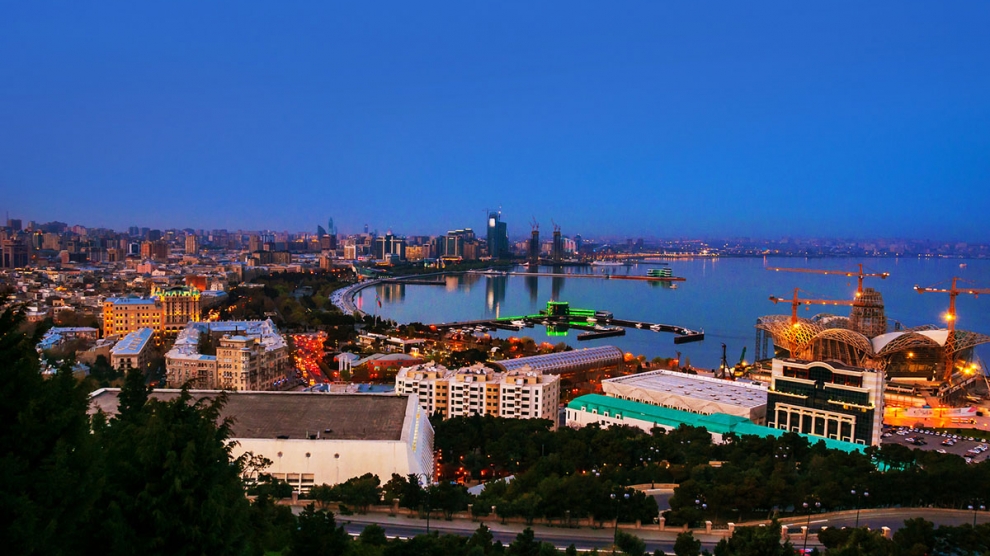 There are picturesque cafes and local restaurants situated around the city which offers the travelers a place to get the taste of local cuisine. Alongside this, there is a museum that is solely dedicated to the findings in the region. There are statues, coins, and other preserved items which are dated back to 2,000 years. Apart from that, there are bathhouses, mausoleums, mosques, and ancient towers which add beauty to the city. 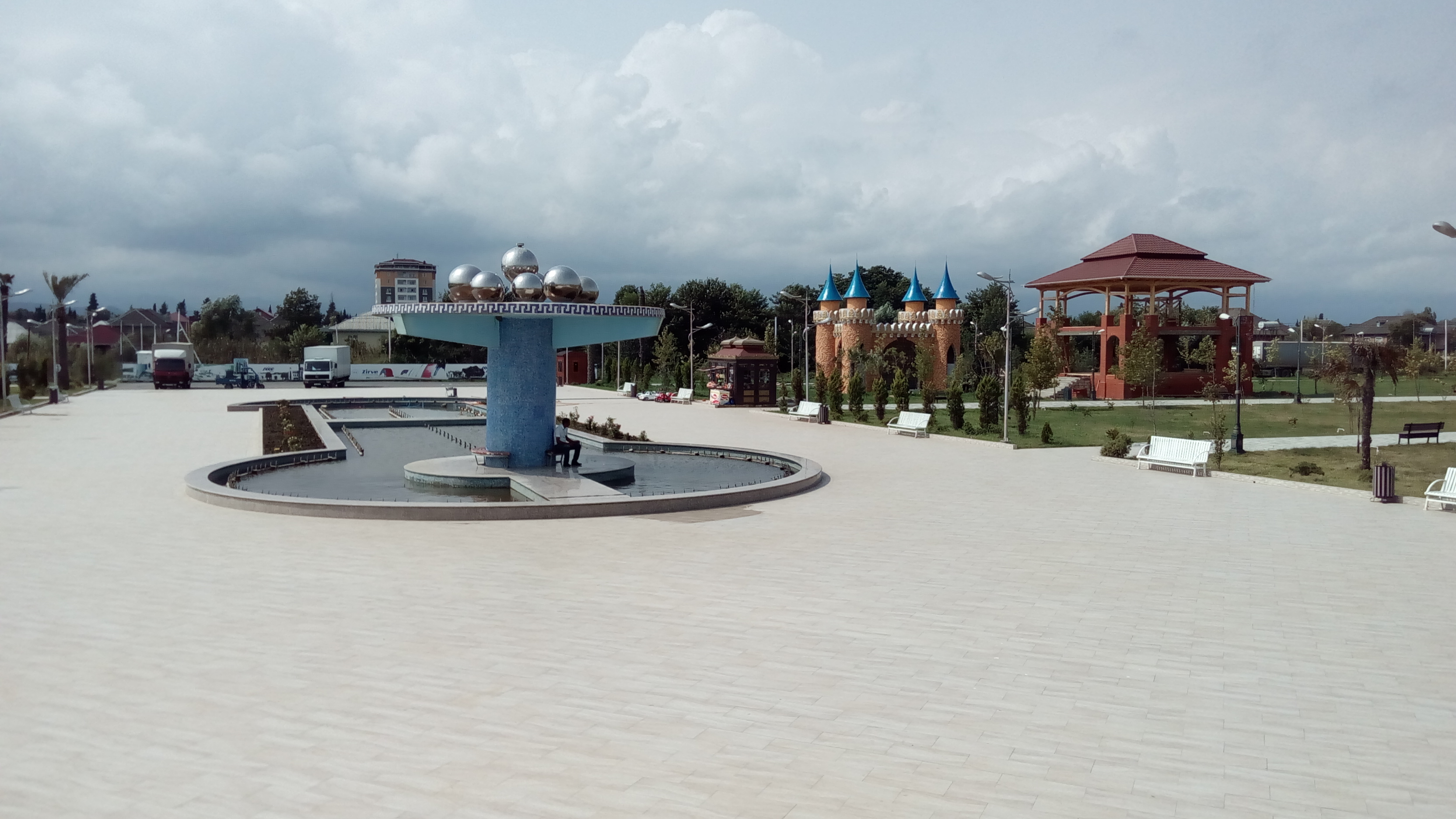 Sheki is located at the foothills of the Southern Greater Caucasus Mountain. Sheki is one of the historical towns in Azerbaijan is one of the oldest Caucasus settlements. This amazing town is known for silk, textiles, and embroidery which made it a significant point on the Silk Road. There are ancient mosques, castles, and an 18th-century palace made by Sheki Khans, which adorns the beauty of this town with the mighty mountains, located in the backdrop and also makes it one of the best places to visit in Azerbaijan. 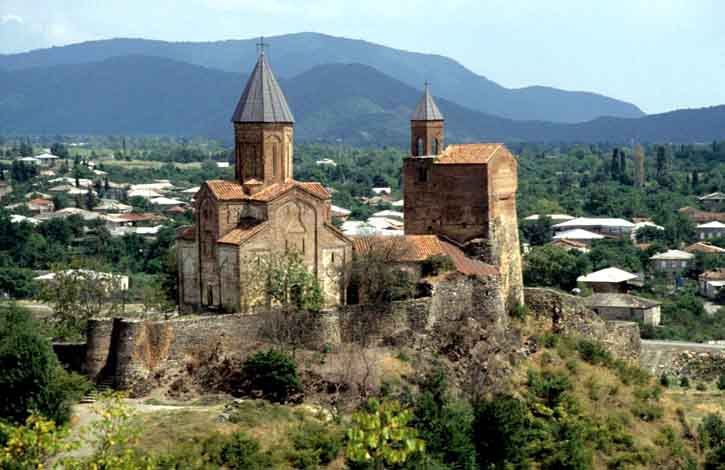 More about Sheki: Sheki - an amazing city in Azerbaijan. 3 must-see places in Sheki.

Goyazan Mountain is located at the Northwestern side of the Qazak district, in the vicinity of the outskirts villages of Abbasbayli and Alpout. The Goyazan Mountain is surrounded by beautiful rolling fields and plains which adds a picturesque view.

Goyazan stands alone against a flat background of rolling fields and plains, giving it a prominent appearance in the landscape. The strange beauty of the mountain ensures its inclusion on the list of places to visit in Azerbaijan. 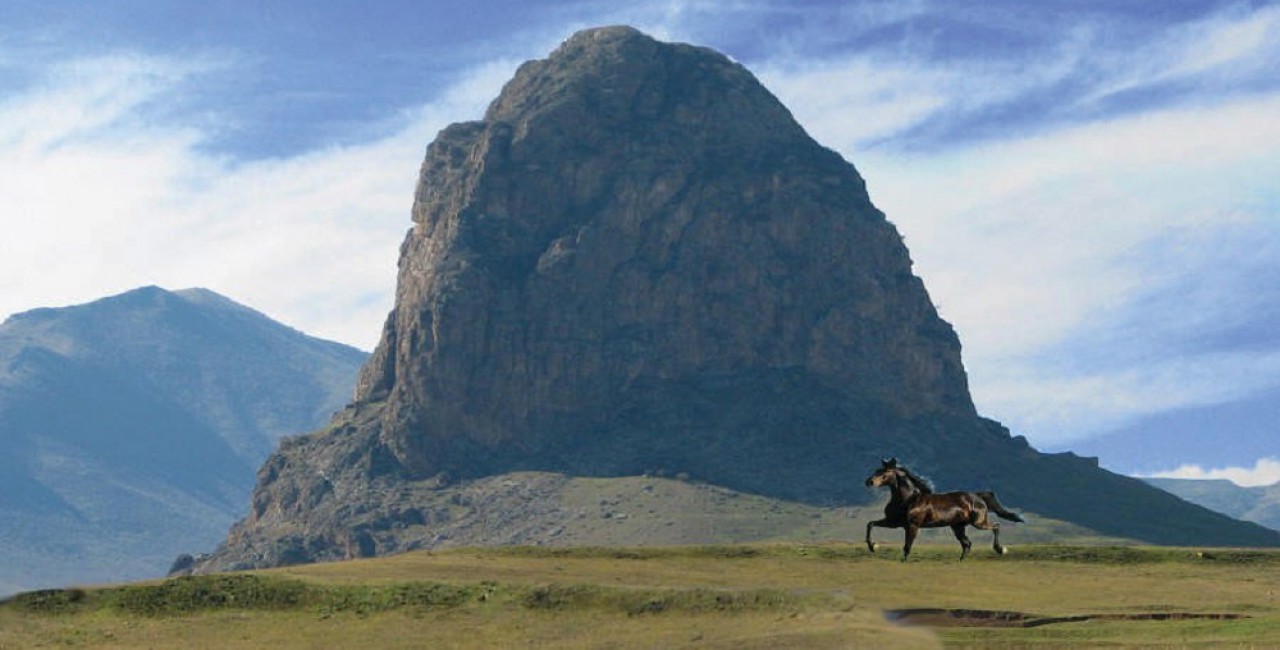 Lake Goygol is an ethereal landscape, one of the most beautiful places in Azerbaijan. The name means the Blue Lake. It’s located in the Murovdag foothills. Surrounded by the dense forests. Created due to an earthquake around the 12th century, this mountain lake attracts many visitors every year who come to explore its beauty. 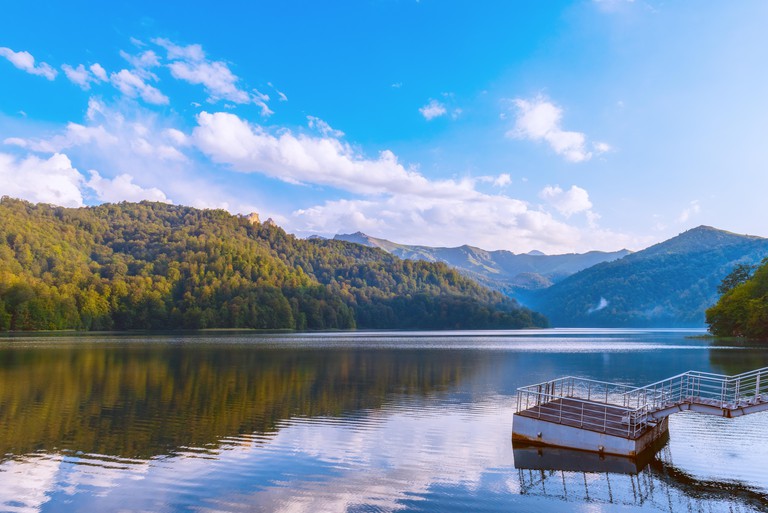 A total of 19 lakes lie in the Greater Goygol region, with eight at an altitude of more than 1,500m (4,921ft). The hour-long journey from Ganja passes through the mountains, providing plenty of spots for photographs. 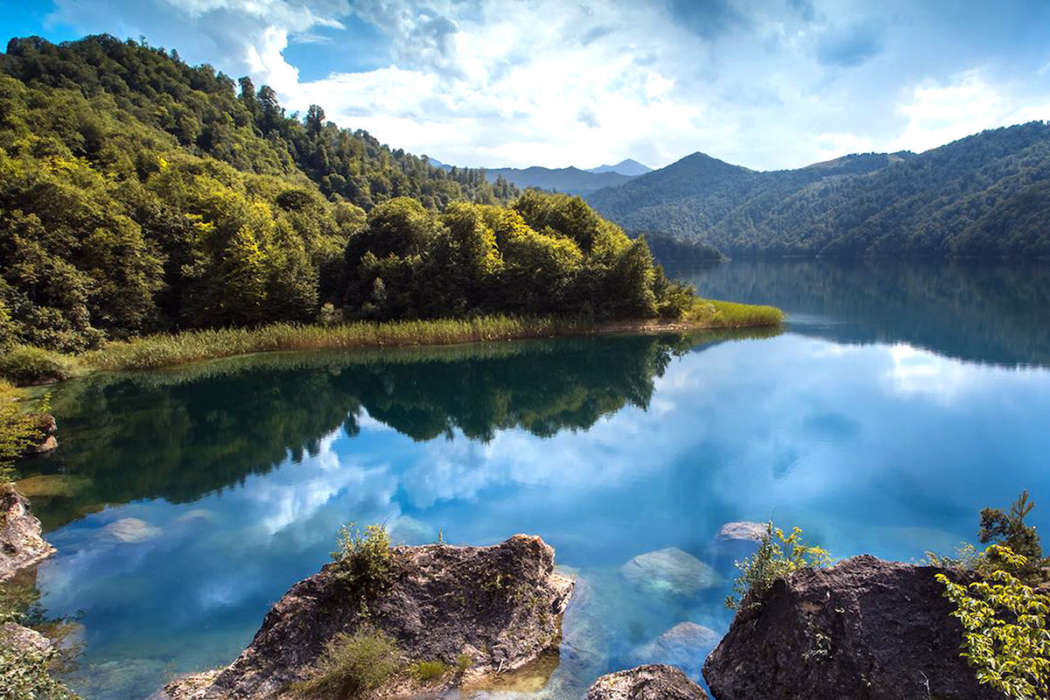 Naftalan resort is famous due to the Naftalan crude oil found here that is said to have healing properties and has sparked a boom in medical tourism to the region. The resort is located in the Naftalan oil fields in the town of Naftalan, and visitors come here to bathe in the oil or to undergo a range of oil-based treatments that are said to help with pain relief and anti-inflammatory healing. Whether or not visitors travel here for health reasons, or just to indulge in this unusual practice, you can still enjoy bathing in the oil in the resort and experience a range of relaxing or stimulating oil treatments at the onsite spa. 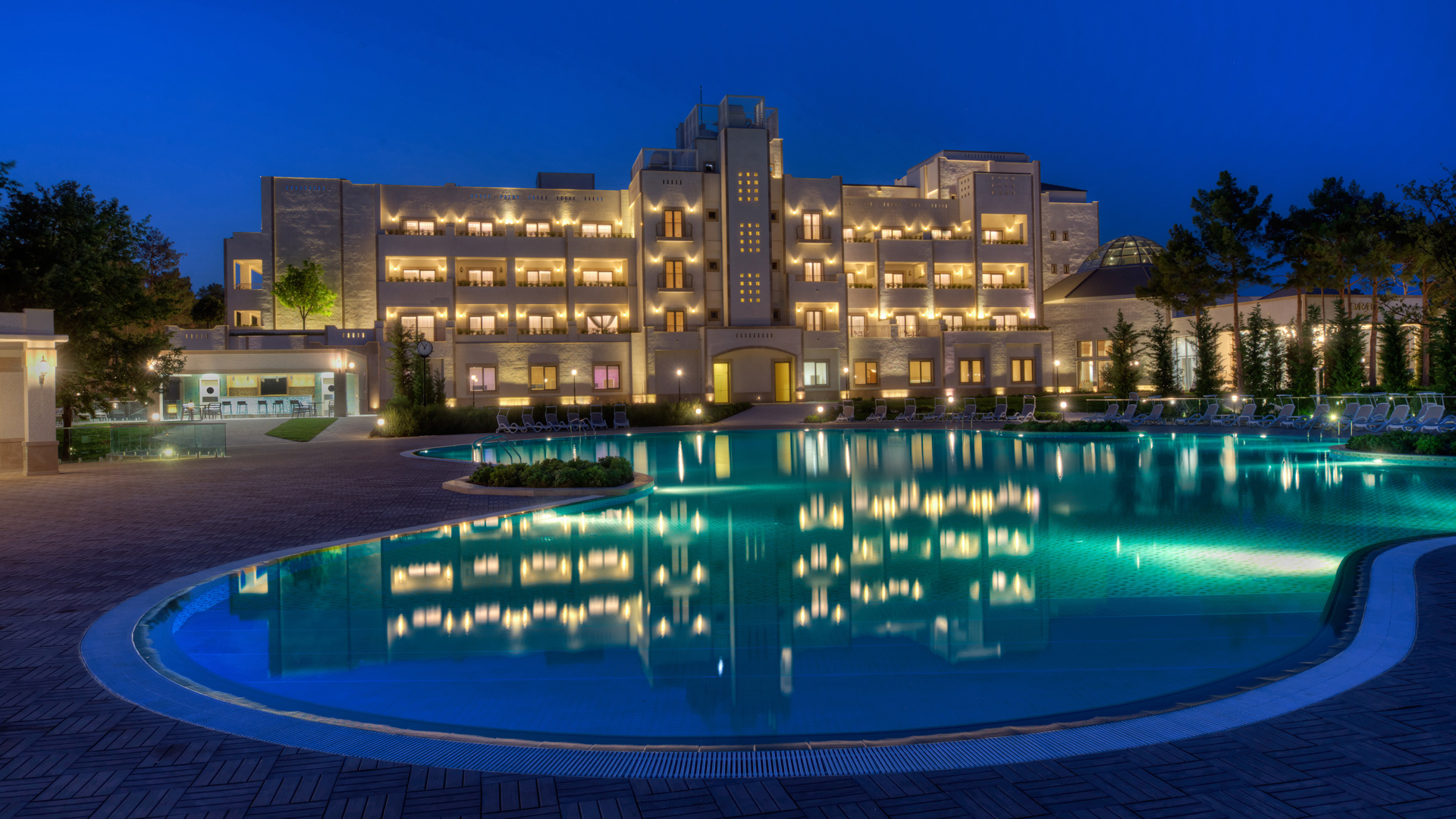 Gobustan is often referred to as the Azerbaijan version of Stonehenge in the United Kingdom. Gobustan is an archaeological reserve that lies to the south of Baku and offers a fascinating insight into ancient civilizations due to over 6,000 rock drawings that span over 537 hectares. The findings in Gobustan point to evidence of habitation dating back from the Stone Age, and aside from the cave and rock drawings, there is also evidence of human settlements, and even ancient tombstones. 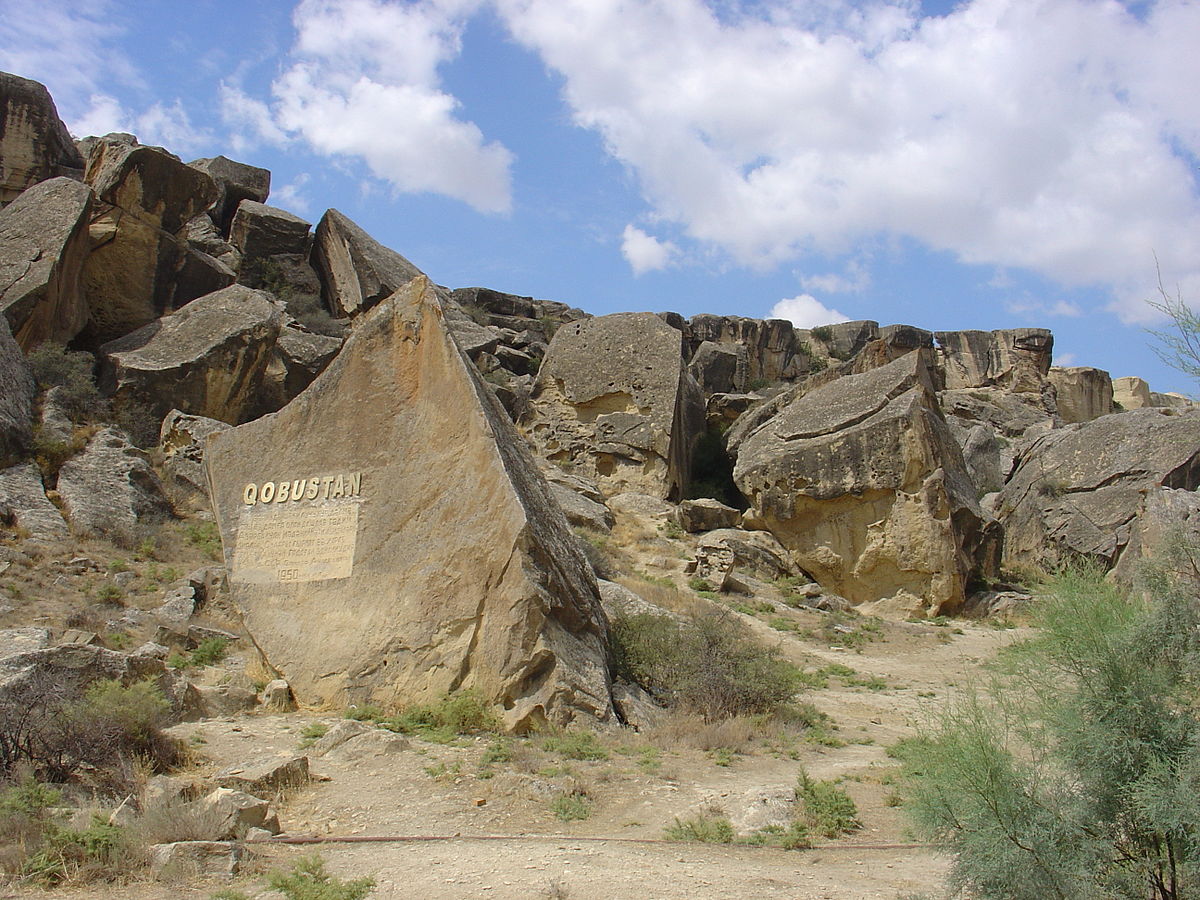 The mud volcano is one of its kind in nature and is considered a bizarre natural phenomenon of Azerbaijan. Located in the desert area of Baku, these mineral concentrated volcanoes rest at the coastline of the Caspian Sea. Known for their healing qualities, these mud volcanoes are not that easy to reach but ensure that one can have a great time exploring them. If you’re looking for some of the best places to visit in Azerbaijan, Baku then this natural retreat should be a must-visit. 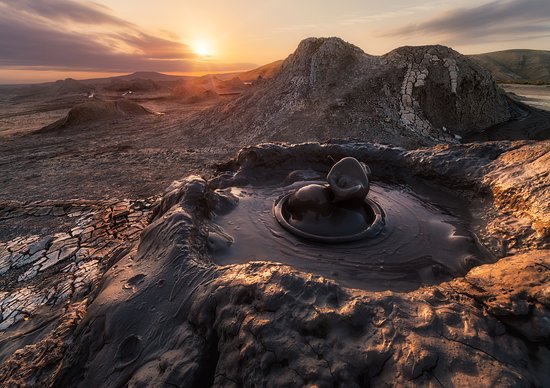 Must read: Gobustan and mud volcanoes - wonders of Azerbaijan

If you want to see burning water then you can’t miss a trip to Yanar Bulag, a curious natural phenomenon that is located on the road between the towns of Astara and Lankaran. The water is pumped out of a pipe and can be set alight due to the levels of natural methane contained within, making the oxymoron of flaming water a reality. Locals in Azerbaijan believe that the water here has healing properties and much of it is collected as drinking water to cure a whole host of ills. 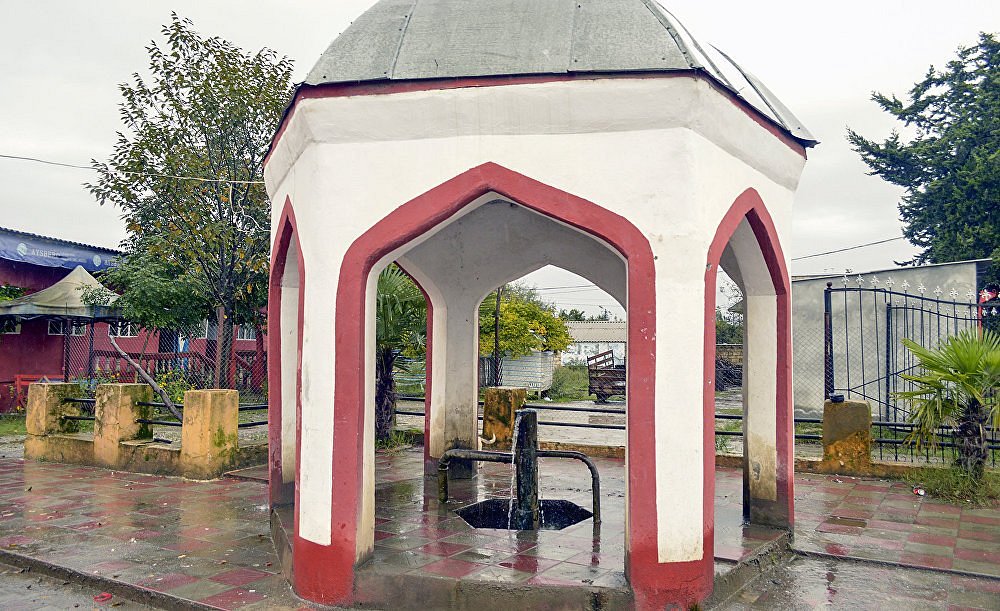 Suggested to read: Ateshgah and Yanardag - some of the must-see places in Baku. 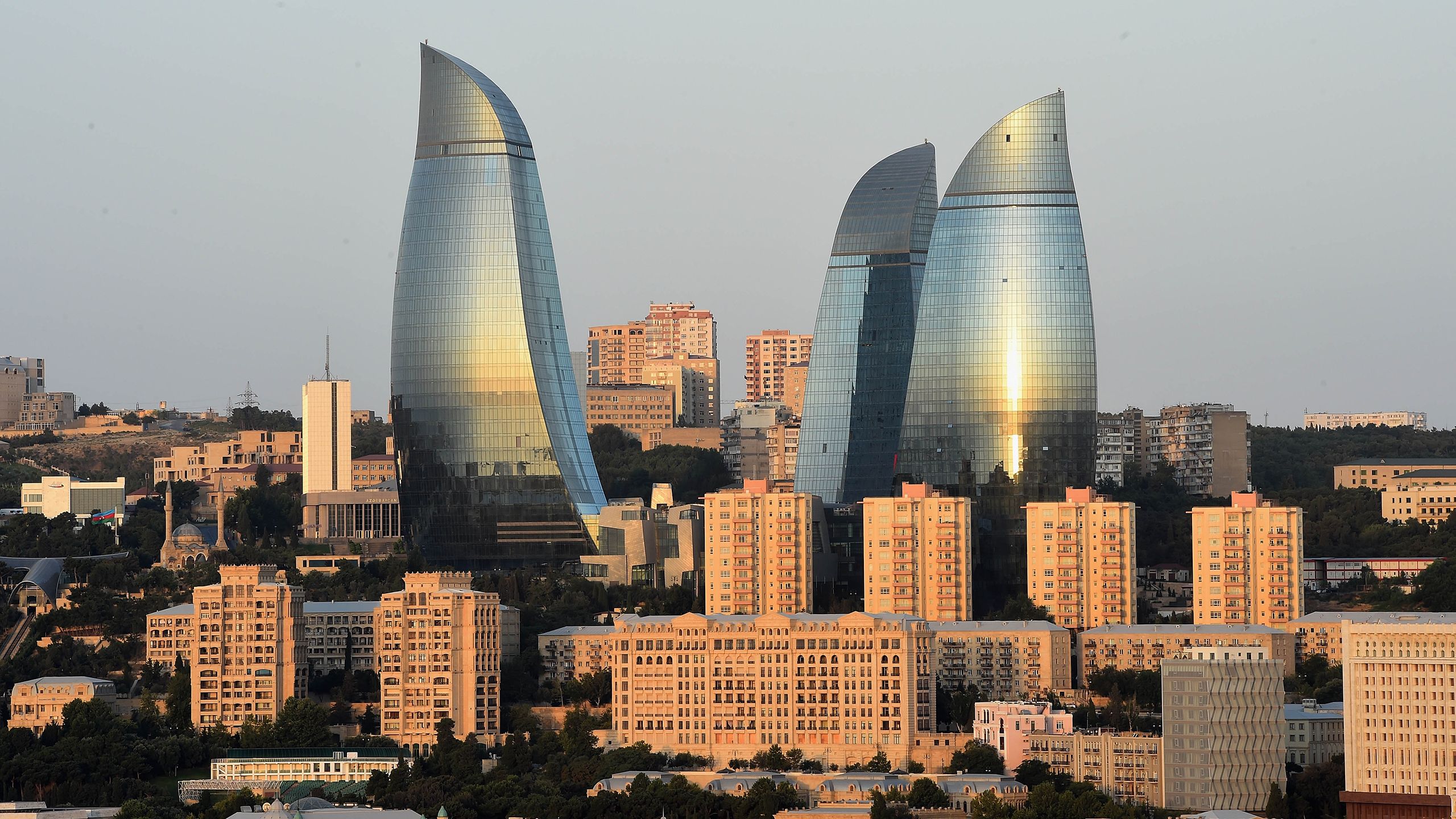 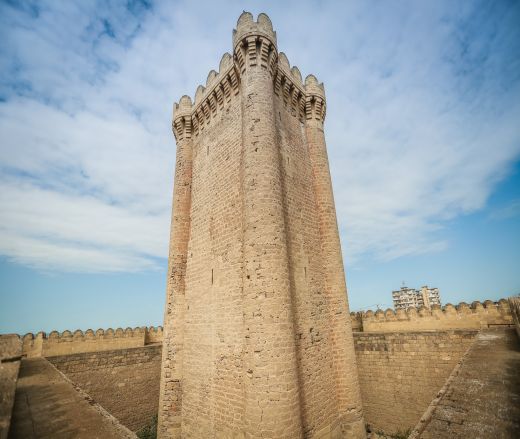