Sheki (Azerbaijani: Şəki) is a city in northwestern Azerbaijan. It is one such major city that has kept its importance as a vital hub of trade along the Silk Roads since the Middle Ages which was a period of rich and diverse cultural development in the region.

Sheki (Azerbaijani: Şəki) is a city in northwestern Azerbaijan. It is one such major city that has kept its importance as a vital hub of trade along the Silk Roads since the Middle Ages which was a period of rich and diverse cultural development in the region. It is surrounded by a district of the same name and located in the southern part of the Greater Caucasus mountain range, 240 km (150 mi) from Baku. The center of the city and the Palace of Shaki Khans were inscribed in the UNESCO World Heritage List in 2019 because of its unique architecture and its history as an important trading center along the Silk Road. 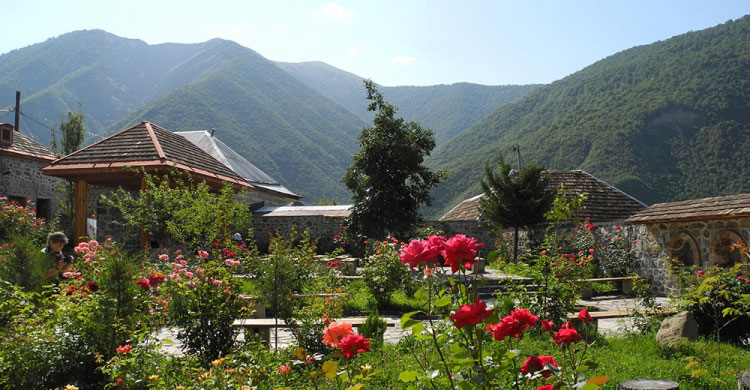 Azerbaijan has played a significant role in the development of trade and cultural routes connecting Central Asia with Anatolia, the Black Sea, and the west. Situated on the west coast of the Caspian Sea and at the foot of the Caucasus Mountains, major cities of Azerbaijan have welcomed the Silk Roads merchants and travelers from across land and sea while they have been a vital center for the exchange not only of goods and merchandise but also of ideas, customs, religions, and cultures. 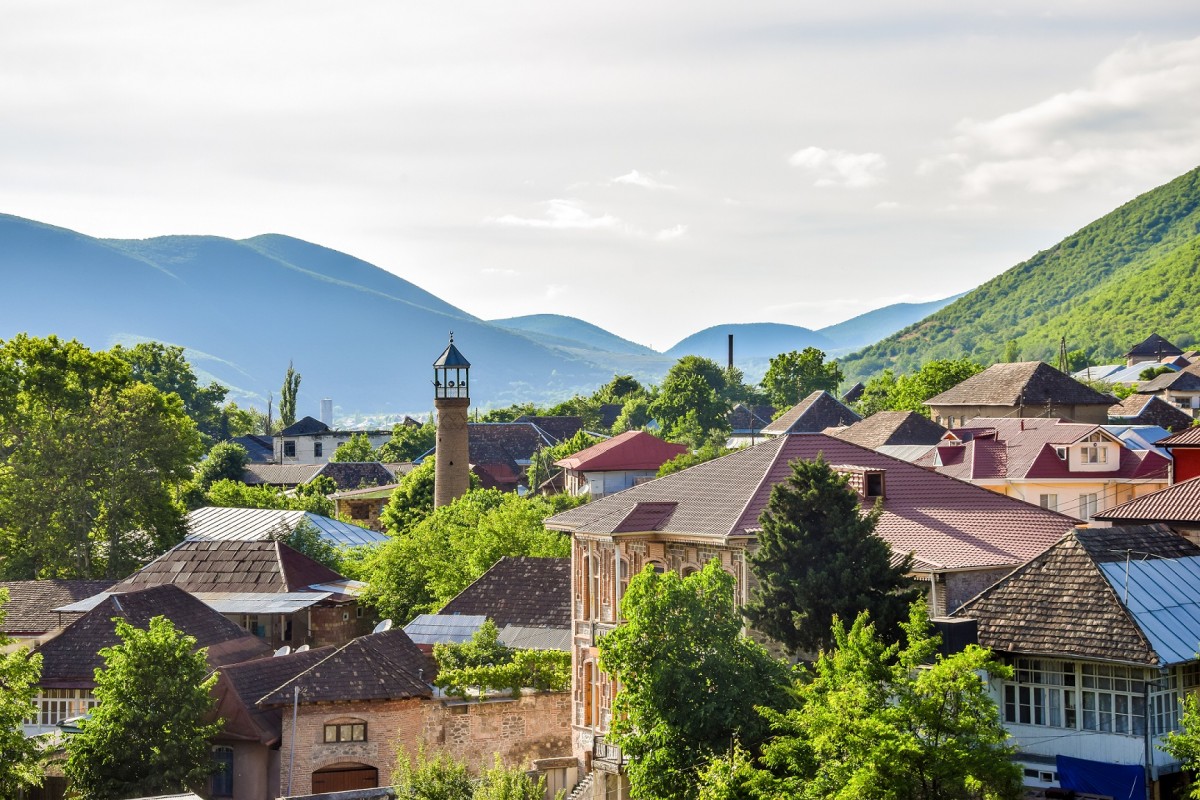 Sheki's architecture, notably influenced by Safavid, Qajar, and Russian building traditions bears witness to the circulation of different ideas and cultures within it. The Khan Palace, situated in the historic center of Sheki, as well as several merchant houses, reflects the wealth generated by silkworm breeding and the trade-in silk cocoons from the late 18th to the 19th centuries. 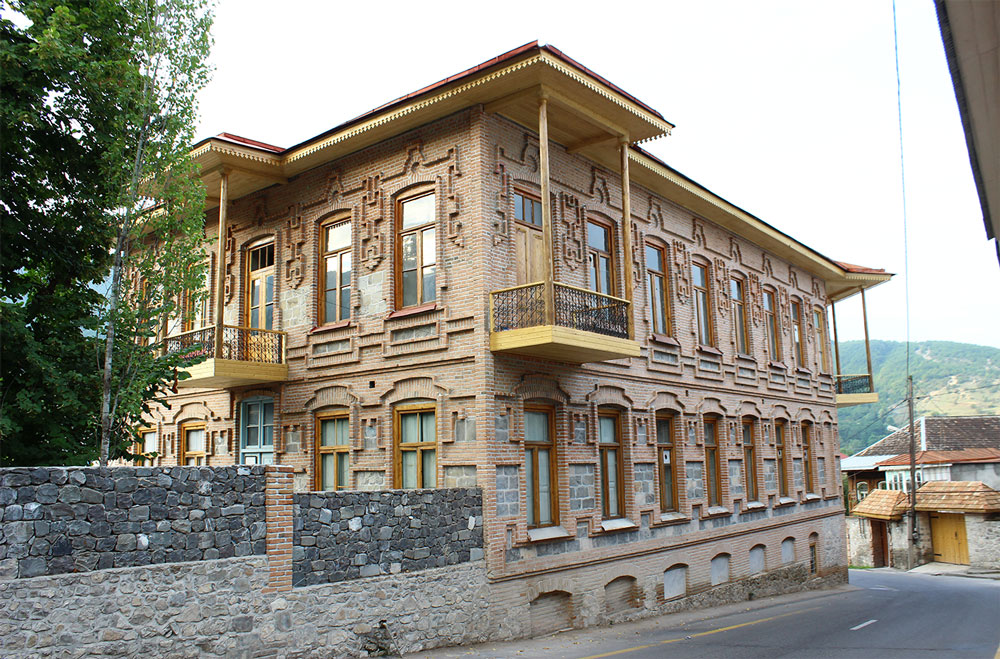 Sheki is a major crafts center. Here, you can buy jewelry and engravings made by local artists. Sheki has its theater, a historical museum, and the house-museum of the famous writer and philosopher M. F. Ahundov.

This region is a far cry from the arid plains and deserts of the south, and beyond historic Sheki lies the fringes of the Greater Caucasus. Wild hills are dimpled with lush valleys, crumbling fortresses, and woodland bursting with wildflowers. For hikers, this is just as enticing as the silk-boom wonders of the old city; together they are almost irresistible.

There are a lot of interesting and historical places to visit in Sheki. In this article, you will find 3 must-see places in Sheki. 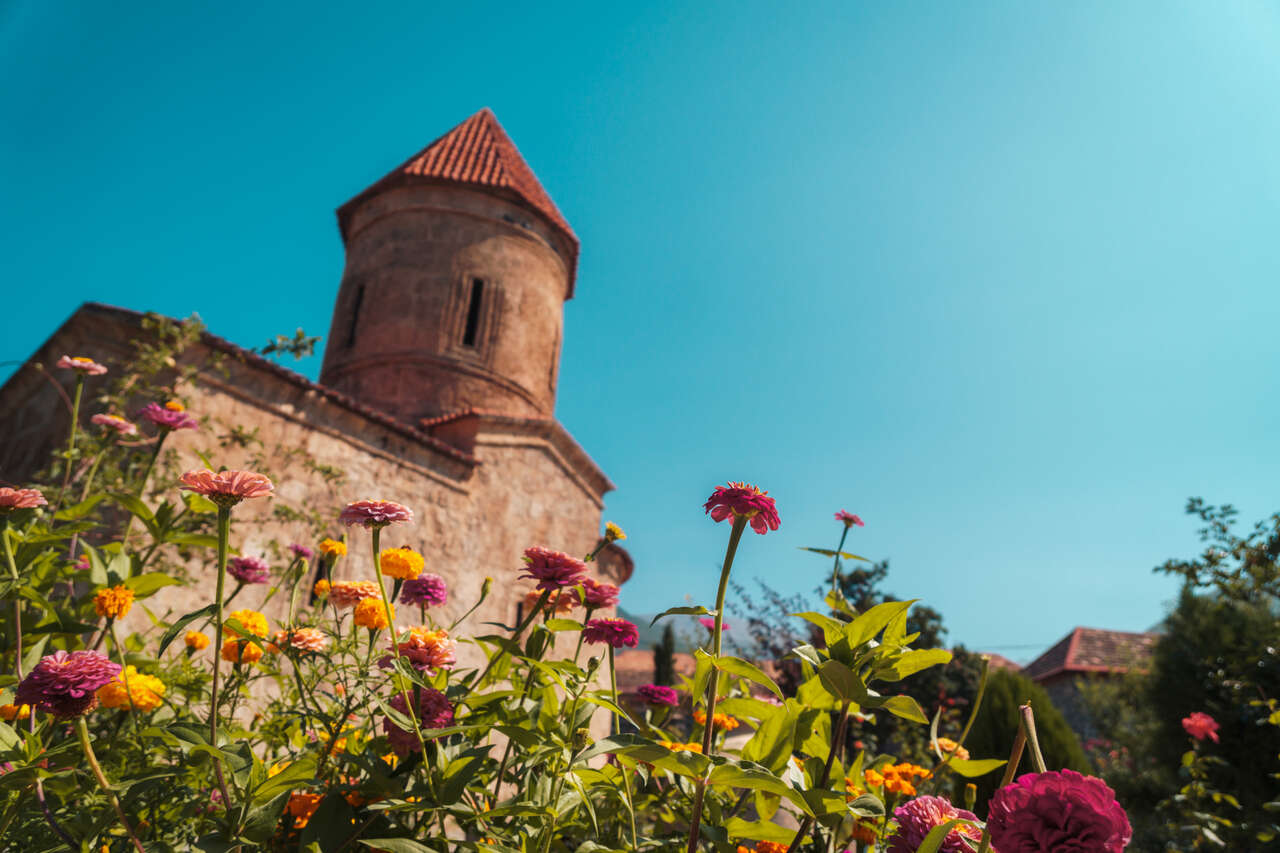 Sheki was famous as a city of craftsmen and merchants. Traders from all of the countries along the Silk Road used to gather in Sheki, so great attention was paid to the construction of caravanserais. Through the 18th and 19th centuries, 5 big caravanserais were active in Sheki to house all of the travelers passing through. Only two of them have survived. The Upper and Lower Caravanserais were built in the 18th century. The craftsmen who built these caravanserais tried their best to make them as comfortable as possible, giving plenty of space so that travelers could rest, store their goods, and trade with residents. The cellars were used for storing goods, the first floor was for trading, and the second floor was where travelers and merchants would stay. 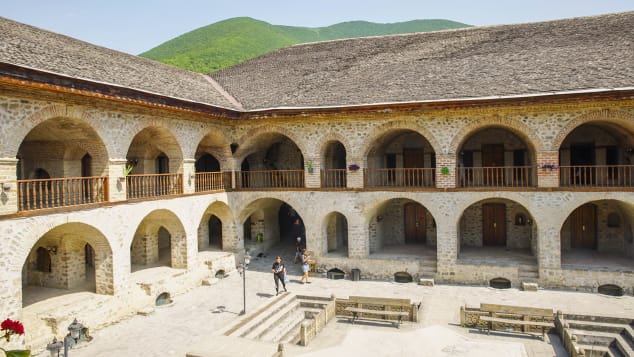 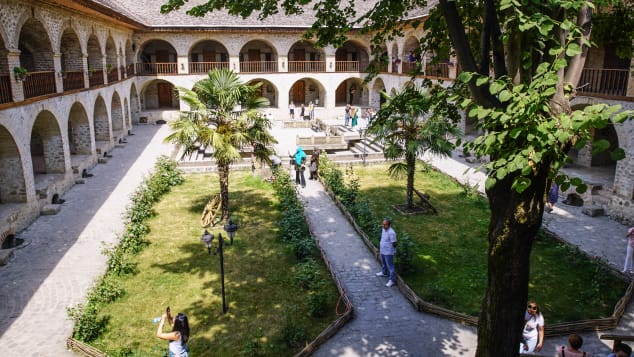 The Sheki Khan’s Palace in Sheki is a historical and architectural monument of world importance. Sheki Khan Palace is part of the historic city of Sheki in Azerbaijan. The building of the Khan’s Palace is situated in the northeast of the city, and along with several merchant houses, the structure reflects the wealth generated by silkworm breeding and the trade-in silk cocoons from the late 18th to the 19th century. The palace also features folk residential construction traditions and is considered as one of the finest examples of 18th-century palace architecture in the Caucasus and Muslim East. Due to the aforementioned distinctions, in 2019 the Palace and the territory of the historic city of Sheki, were included on the UNESCO World Heritage list. 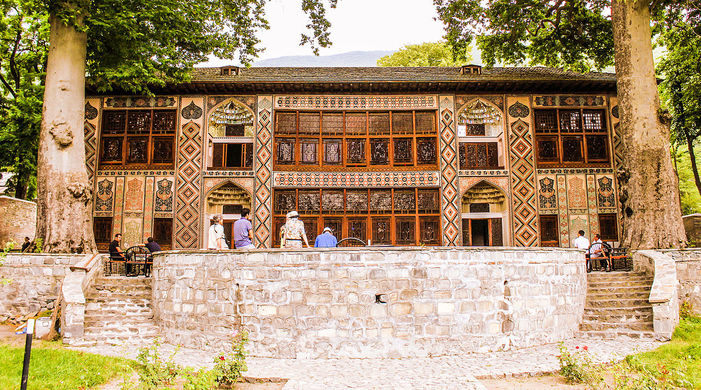 The basic material for building the palace was raw bricks, river stones, plane trees, and oaks. The most amazing is that not a single nail or glue drop was used for the construction! Everything is in place due to special craftsmanship, the secret of which was lost and is now being brought back to life by local artisans. The palace took ten years to build: two years to build the basic building, and eight years to make all of the decorations. 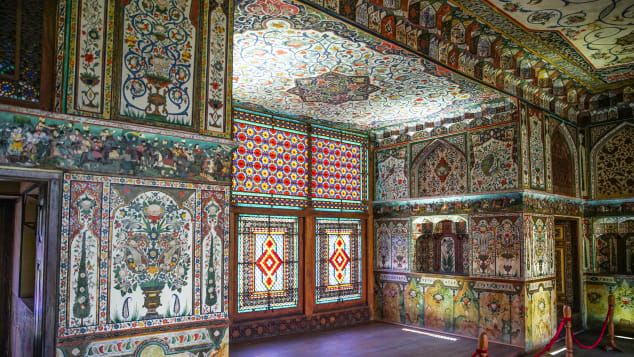 There are only 6 rooms, 4 corridors, and 2 mirrored balconies in the Sheki Khans’ Palace. All the windows and doors of the palace were skillfully assembled from pieces of wood and colored Venetian glass. All of the light that filters into the palace is rich in colors of the rainbow, from the red, yellow, blue-purple, and green colored glass.

In front of the palace, there used to be a marvelous garden, from which only two huge branchy plane trees, which are even older than the palace, have survived. For 500 years, like devoted servants, they have been protecting this architectural treasure of Azerbaijan. 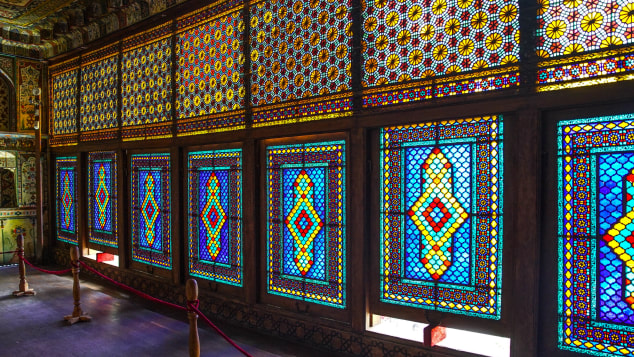 Galarsan-Gorarsan (Azerbaijani: Gələrsən-Görərsən) is a fortress in Azerbaijan, built in the Middle Ages, ruins of which remain on the coast of the Kish River, about 4 kilometers (2.5 mi) from Shaki city, on the summit of Garatepe Mountain. 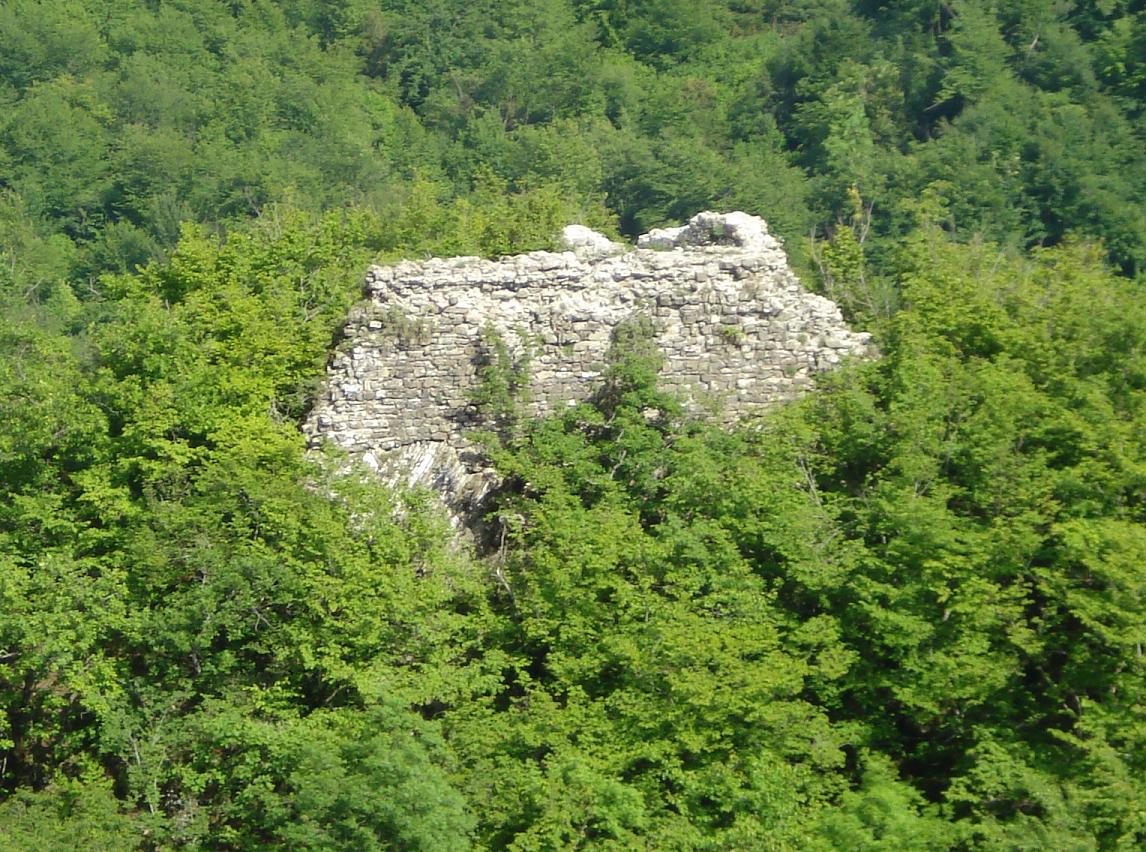 The construction of the fortress is dated back to the 8th or 9th century. Gelersen-Gorersen was thoroughly consolidated and was used for defense. In translation from the Azerbaijani language, the name of the fortress means “will come-will see”. An interesting episode from the history of Shaki Khanate is connected to it. When the ruler of Iran, Nadir Shah, attacked Shaki Khanate in the 18th century, Haji Chalabi, khan of Shaki Khanate, secured in the fortress. When Nadir Shah offered him to give in, Chalabi answered: “You will come and see”. Infuriate Nadir shah, who has not expected such an answer, decided to capture the fortress by force. In 1744, the shah approached the fortress with a great army, but couldn't capture it and fell back. Since then the fortress was famed as Gelersen Gorersen. 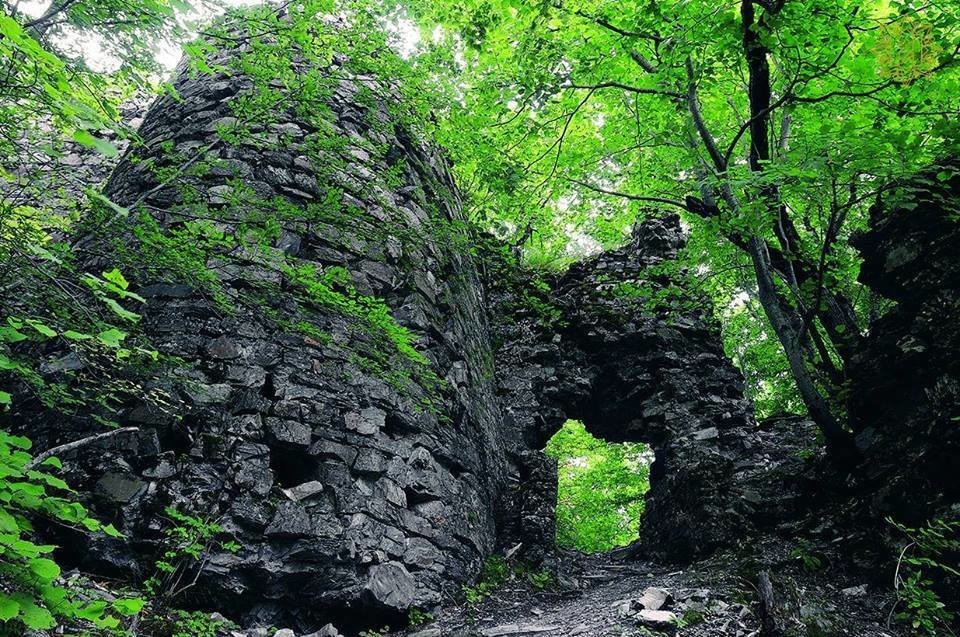 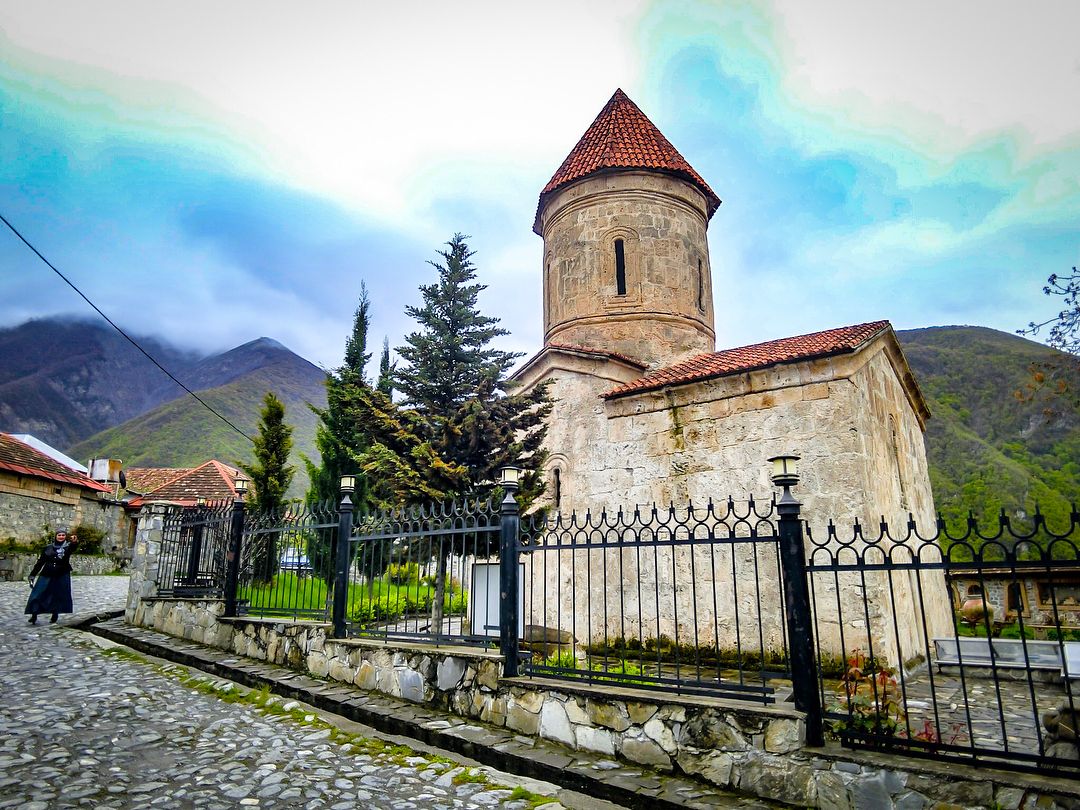