With its unique history and culture, there are plenty of exciting things to do in Tbilisi. Famous for its historical sites, you will feel like you step back in time if you visit the charming capital city of Georgia.

The capital of Georgia Tbilisi is a city of contrasts, where both modern structures and old architecture co-exist.

Geographically it is located in-between Europe and Asia and so is its culture – it has this intricate blend of Europe, Asia and definitely its own twist too. No wonder why – throughout the ages, they were under Mongols, Iranian, Russian, and others.

With its unique history and culture, there are plenty of exciting things to do in Tbilisi. Famous for its historical sites, you will feel like you step back in time if you visit the charming capital city of Georgia. 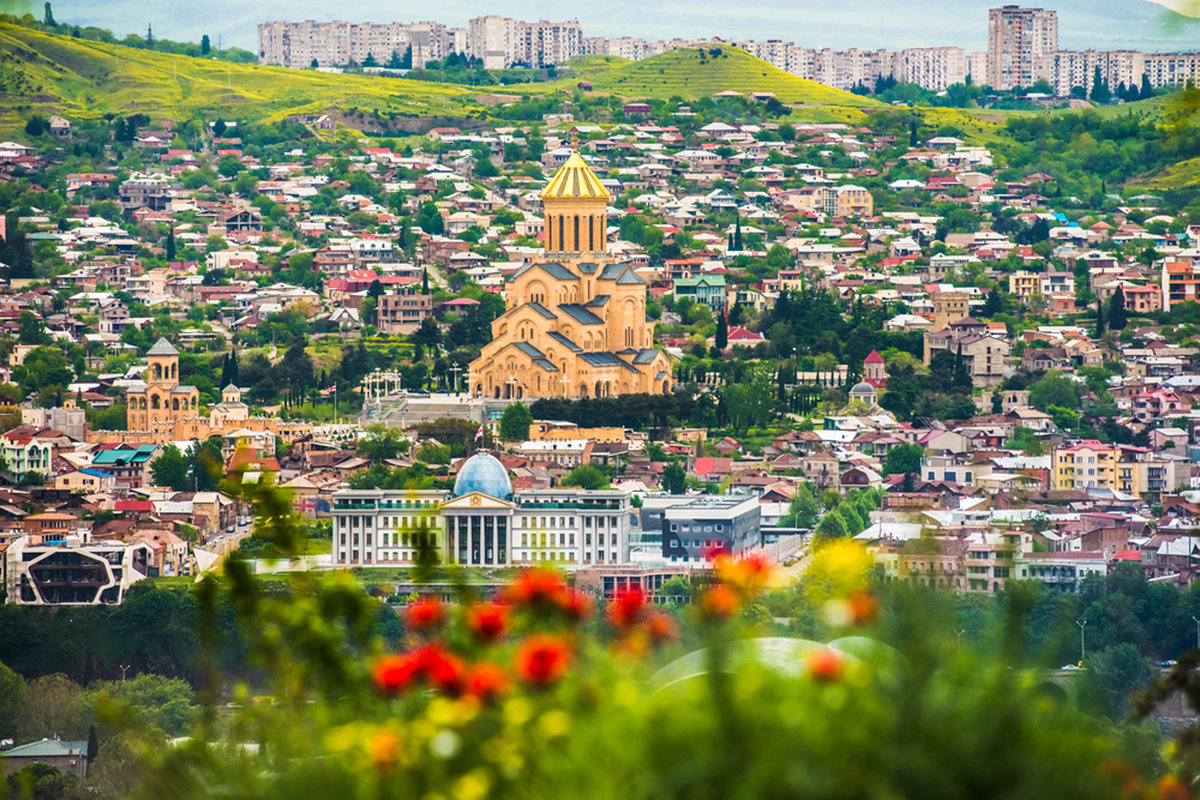 If you are wondering what Tbilisi tourism has to offer and what to see in Tbilisi, this Tbilisi travel guide will give you the information you need to help you plan your trip to Tbilisi.

5) The Statue of Mother Georgia 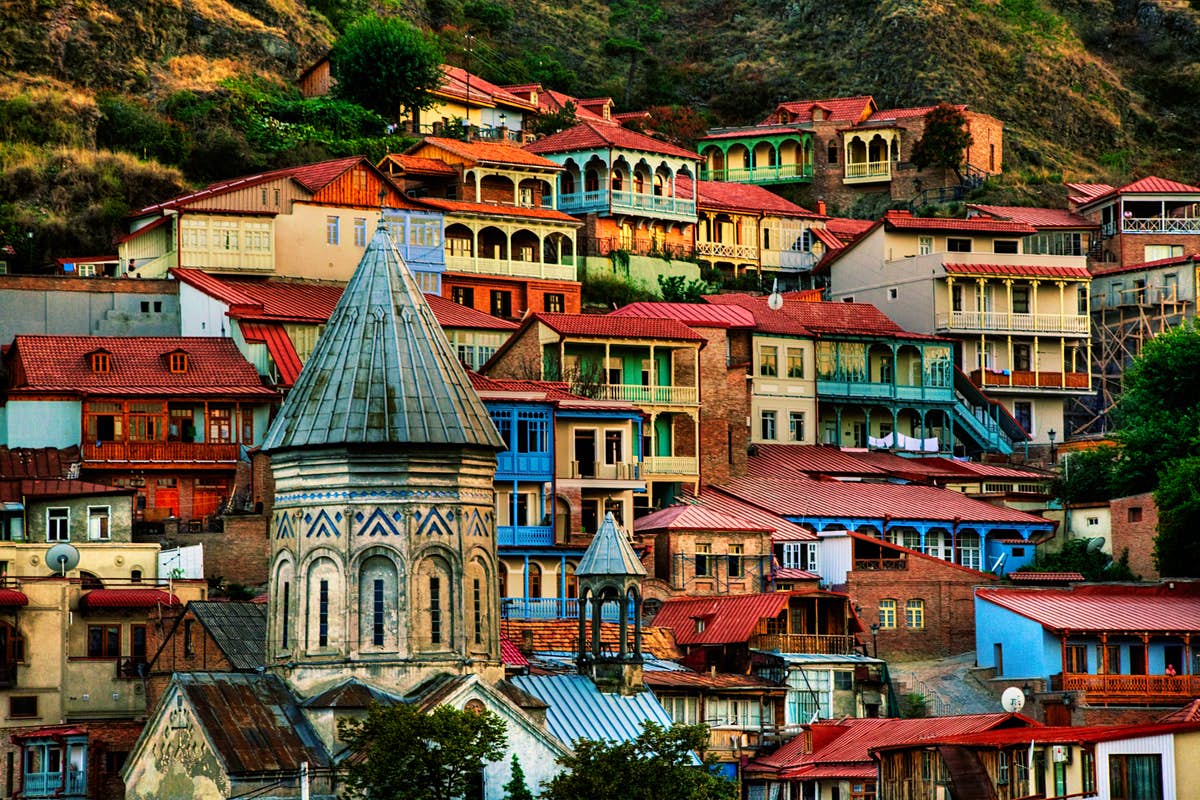 The area in between the sulfur baths, Narikala Fortress, and Liberty Square is probably the most charming area in the whole of Georgia. You could spend hours, if not days, getting lost just wandering the narrow streets of the Old Town. Hidden away in this colorful and characterful district, you’ll find some of the best places to eat in Tbilisi, cool coffee shops, galleries, and a lot of cats! There are some important religious spots in the Old Town, including Jumah Mosque.

With an increased number of tourists visiting Tbilisi, many art galleries and workshops have sprung up in the area in recent years, as well as some cool and intimate wine bars. 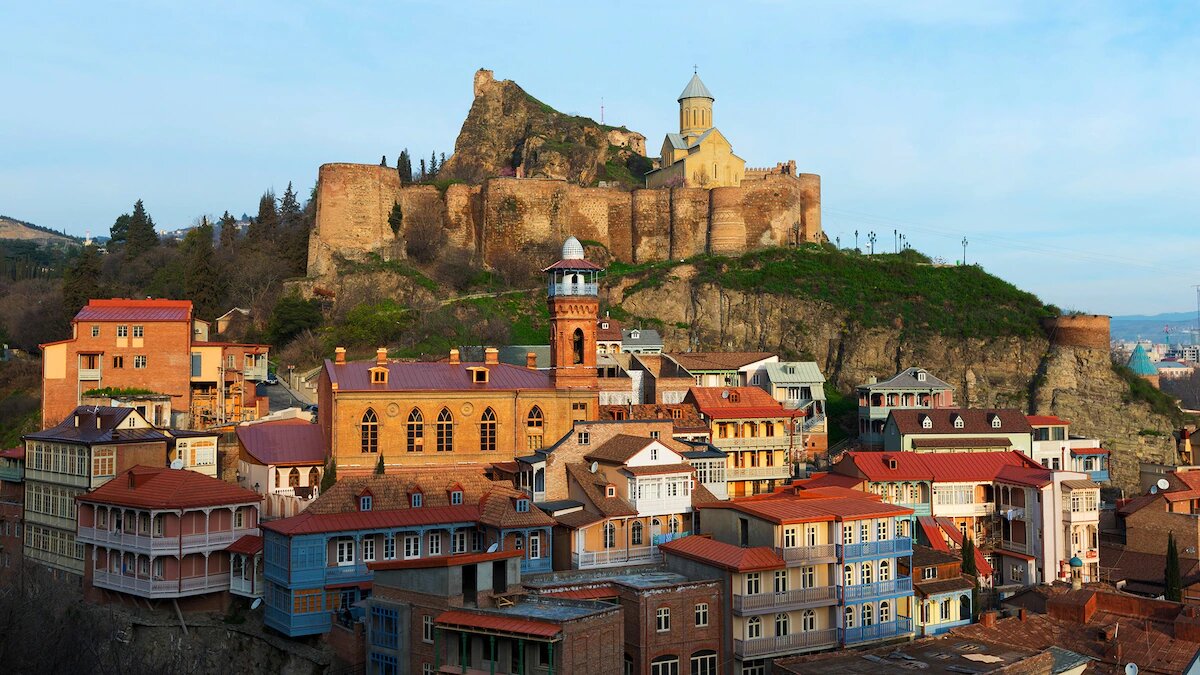 Mtatsminda Park is one of the best places in Tbilisi if you want to escape the hustle and bustle without really leaving the city. The highest point of the Georgian capital, Mtatsminda Park offers lots of things to do and see and you could spend an entire day up there.

The family-friendly landscaped park—with its carousels, waterslides, roller coaster, and Ferris wheel—remains a popular destination for travelers and locals looking for a day of fun and leisure. 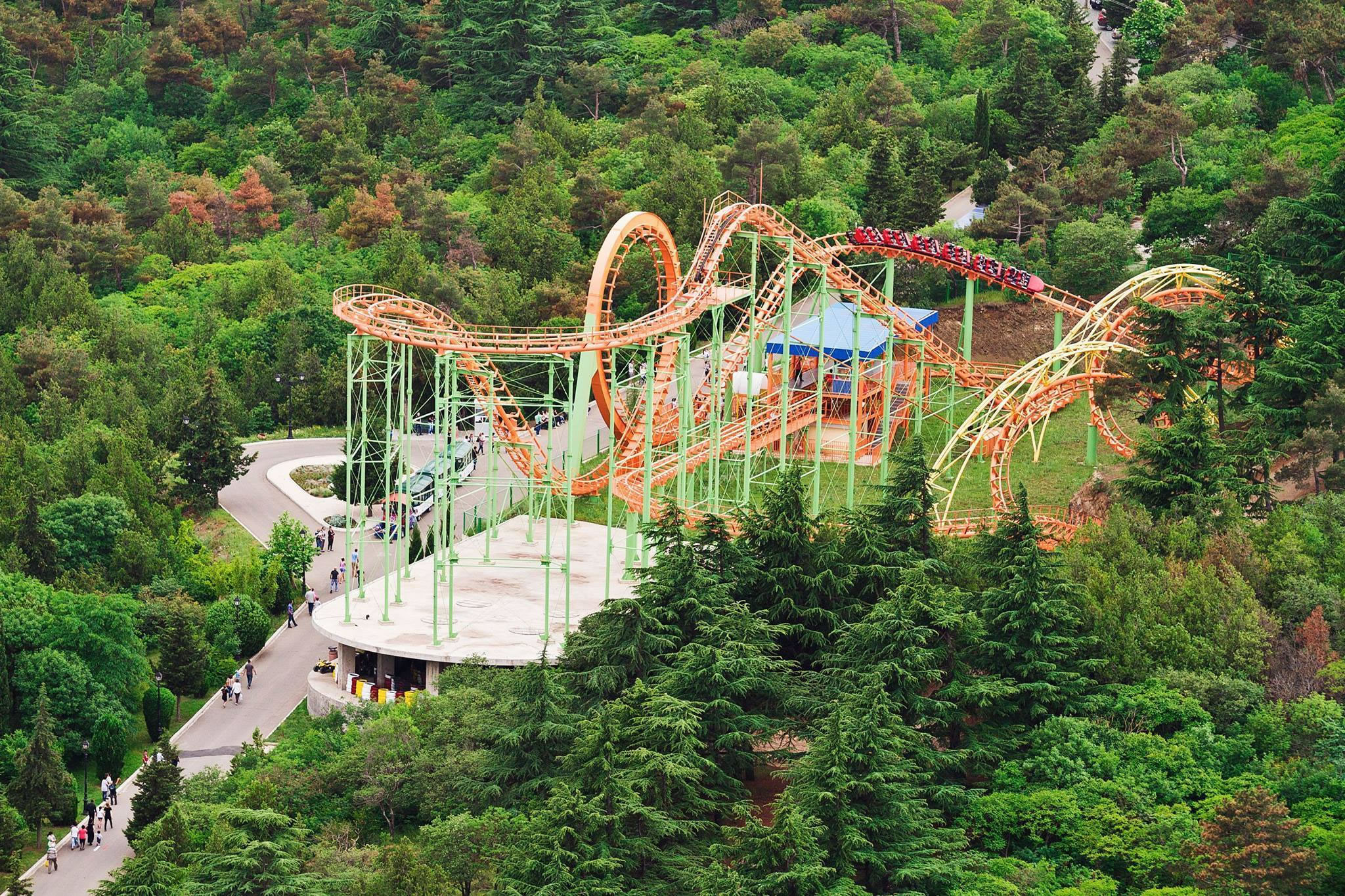 This fairytale-like clock tower is a relatively new edition to the capital. Made by Rezo Gabriadze, a puppet master and screenwriter, the tower features hundreds of handmade tiles created by Gabriadze himself. Every hour, an angel comes out of a door at the top and strikes a bell with a hammer; at noon and 7pm, you can watch a small puppet show called The Circle of Life. 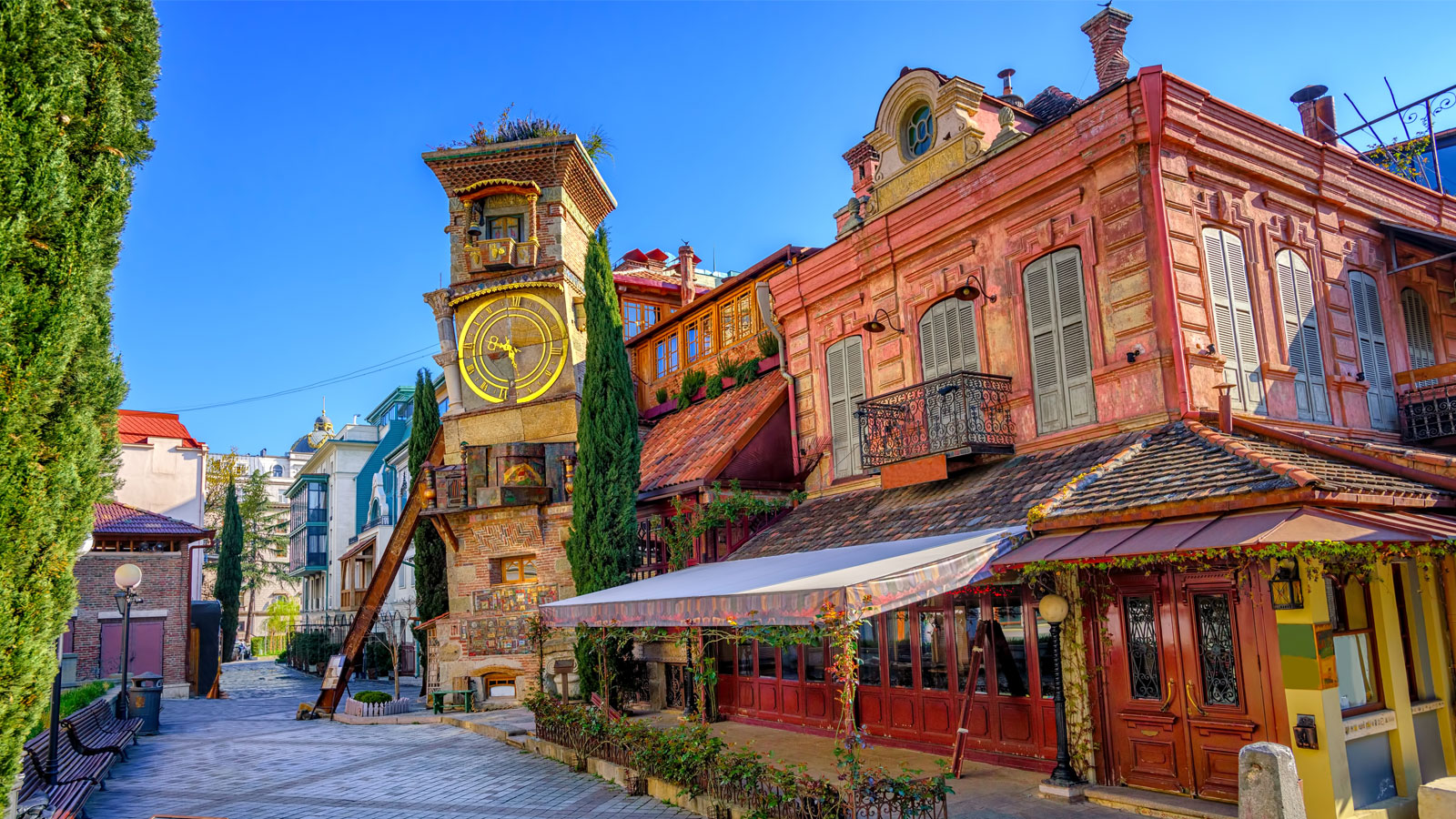 Narikala Fortress is on the edge of the Old Town, so if you’ve spent the day there, this is a great place to combine into that day. Dating all the way back to the 4th century AD, it used to have a Persian citadel inside! It was expanded upon in the subsequent 1500 years before being damaged by an explosion. Nowadays, you can hike to the top of the fortifications of one of the most famous places in Tbilisi!

From the Fortress, you can take a zipline down to the botanical gardens. Without a doubt one of the coolest ways to get around town! 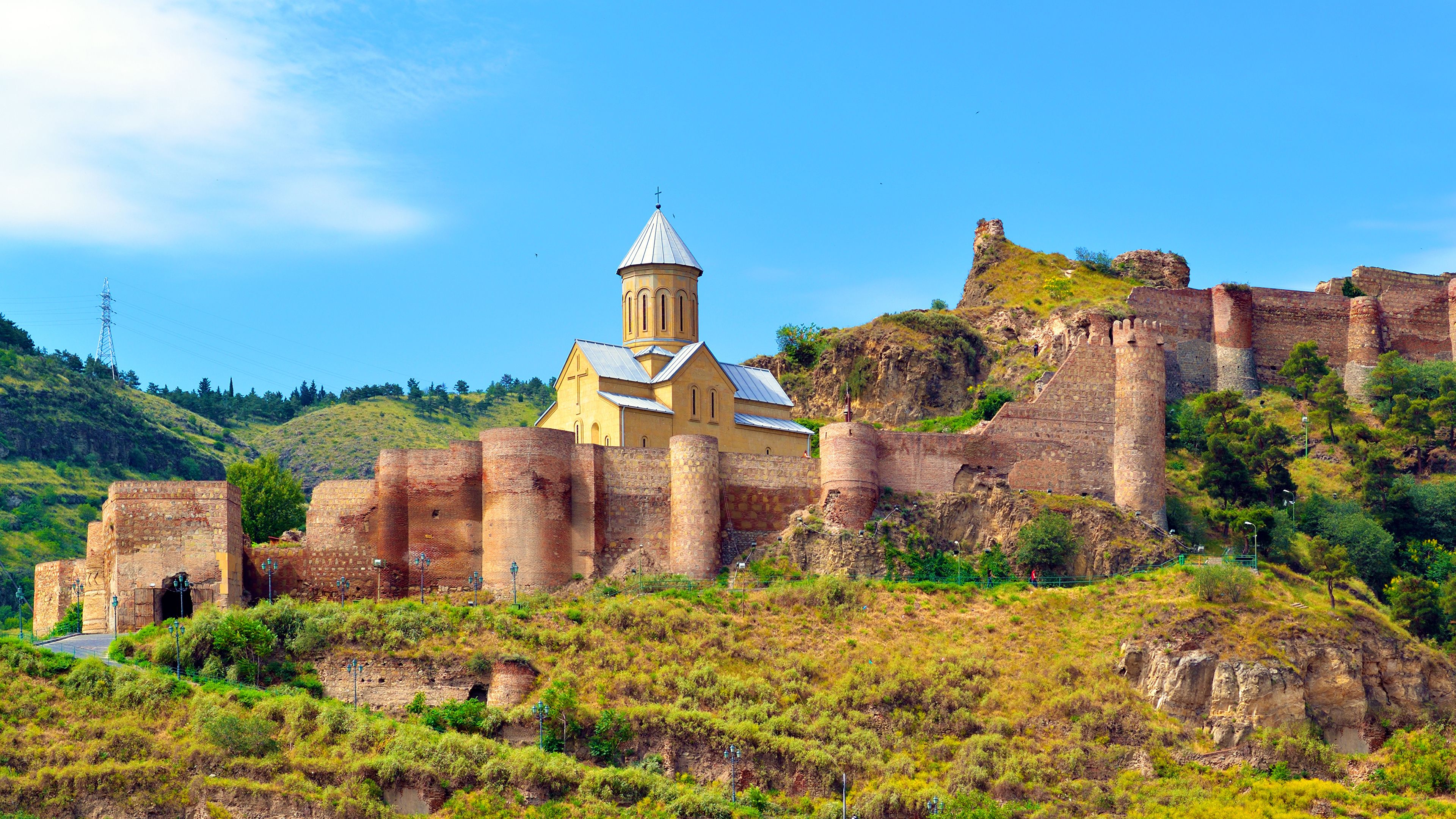 5) The Statue of Mother Georgia

Right next to Narikala Fortress is another Tbilisi must-see. The Mother Georgia Statue, aka Kartvlis Deda. Standing atop Sololaki Hill, the 20-meter-tall aluminum statue was designed to celebrate the city’s 1500-year anniversary. It depicts a woman in Georgian National Dress holding two things in her hands. On her left, there is a bowl of wine to greet friends, while on her right there’s a sword to deter enemies. One of the best Tbilisi vacation ideas if you want to learn about the national culture and get some good views! 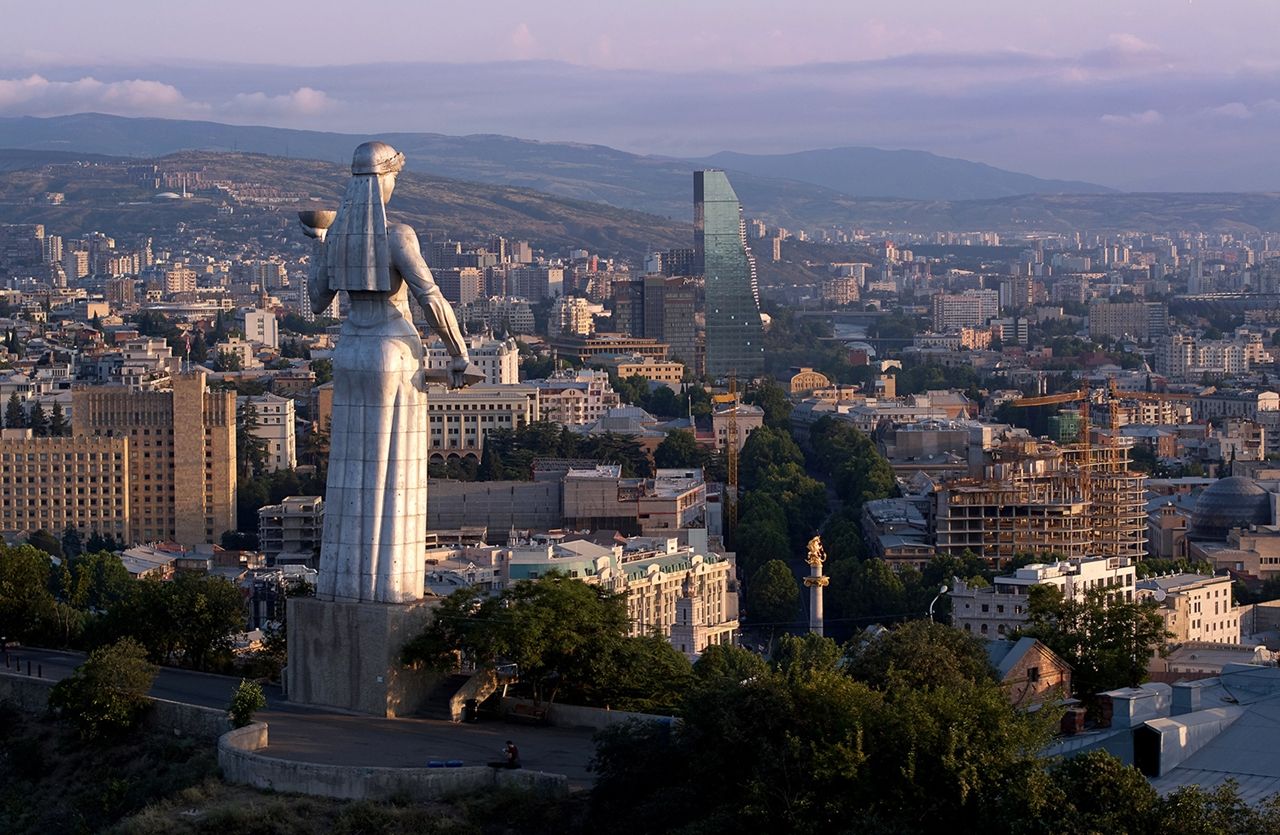 The famous Peace Bridge is another of the top Tbilisi attractions. One of the first modern architectural additions to the city is a glass-and-steel structure and has a nice LED display in the evenings. Michele De Lucchi, an Italian architect, designed the pedestrian bridge over the Mtkvari River; it opened to the public in 2010. The Peace Bridge connects Erekle II Street, a pedestrian street full of cafés, and Rike Park.

Another modern landmark here is Rike Park Concert Hall, an intriguing building that resembles two metal tubes next to each other. 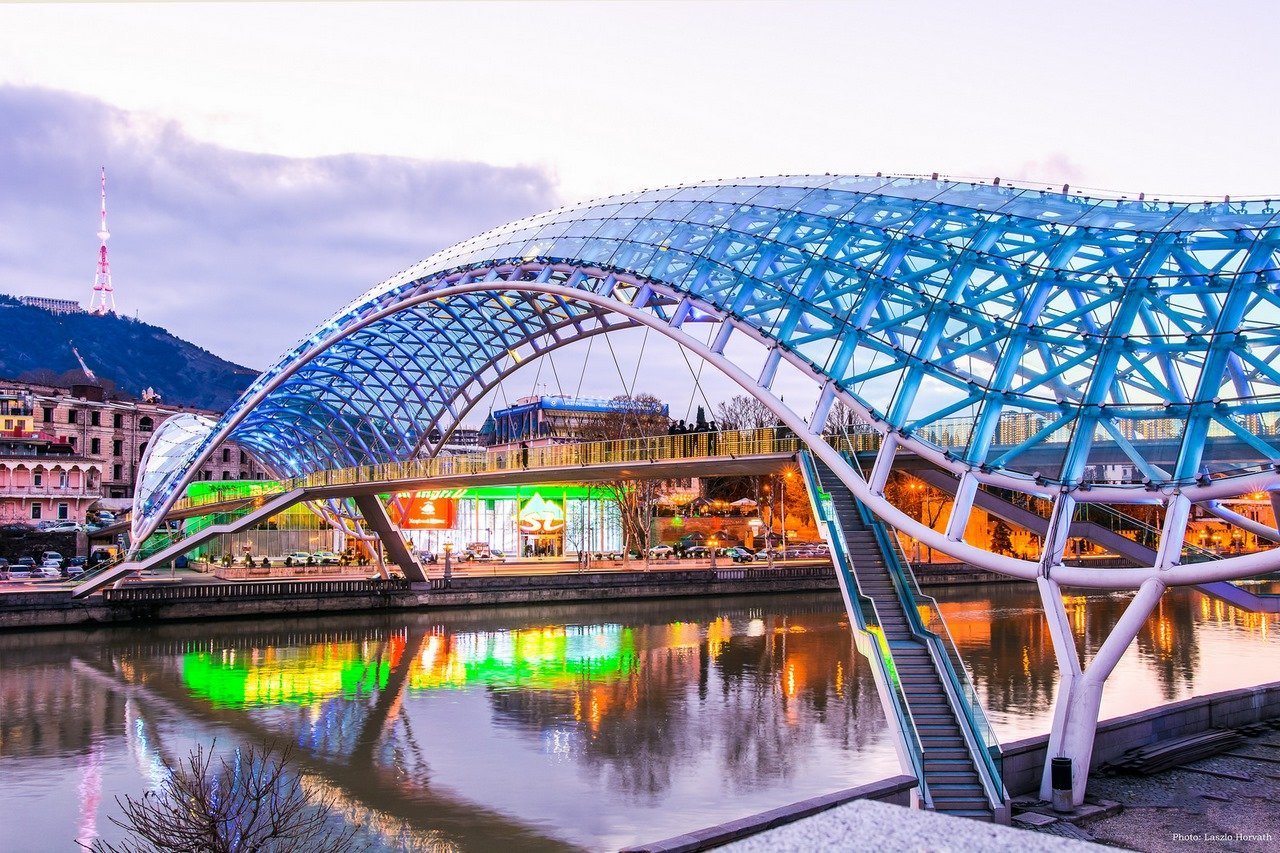 Rike Park is a new-ish park on the left bank of Mtkvari River. One recreational space in Old Town is Rike Park, which features pools, fountains, a giant chess board and several dozen chairs. The park blends manicured gardens with concrete and is a popular recreational area for locals, who come jogging here in the morning and bring the whole family on the weekends. During summer evenings, locals and visitors enjoy the dancing fountains accompanied by music and a light show. 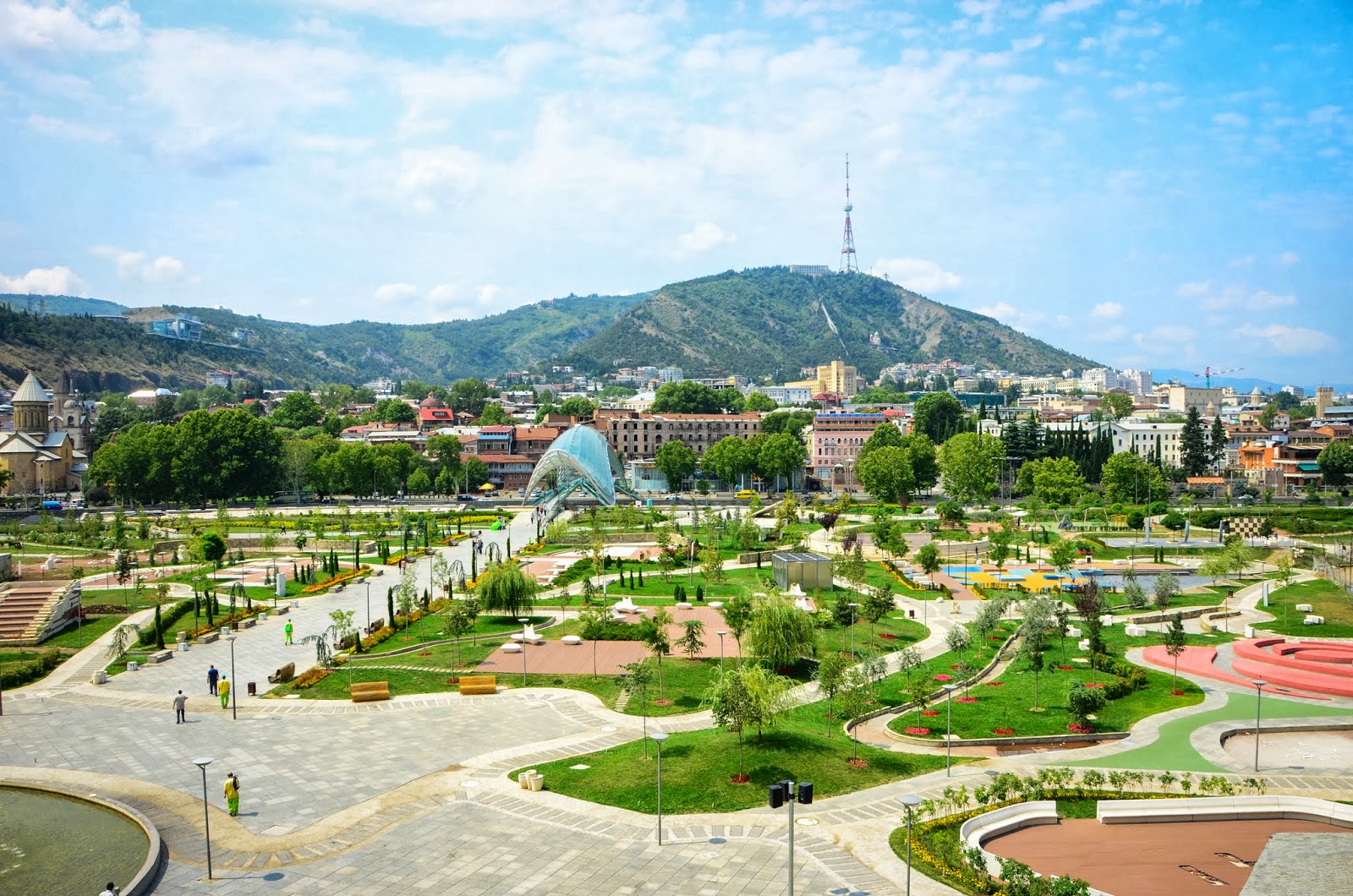 The Chronicles of Georgia is one huge statue outside of the city center. Often referred to as Georgian Stonehenge by the locals, the 30-meter statue is covered in depictions of Georgian royalty, myths, and legends, and scenes from this country have a complicated history. There are even some biblical scenes close to the bottom of the pillar!

It’s another spot where you’ll be able to get fantastic views of the city, and also the “Tbilisi Sea”. Although locals call it the sea, it’s actually a lake. This is a great place to go if you want some peace and quiet away from the city for a day, as you can sunbathe on its shores and swim in the waters! 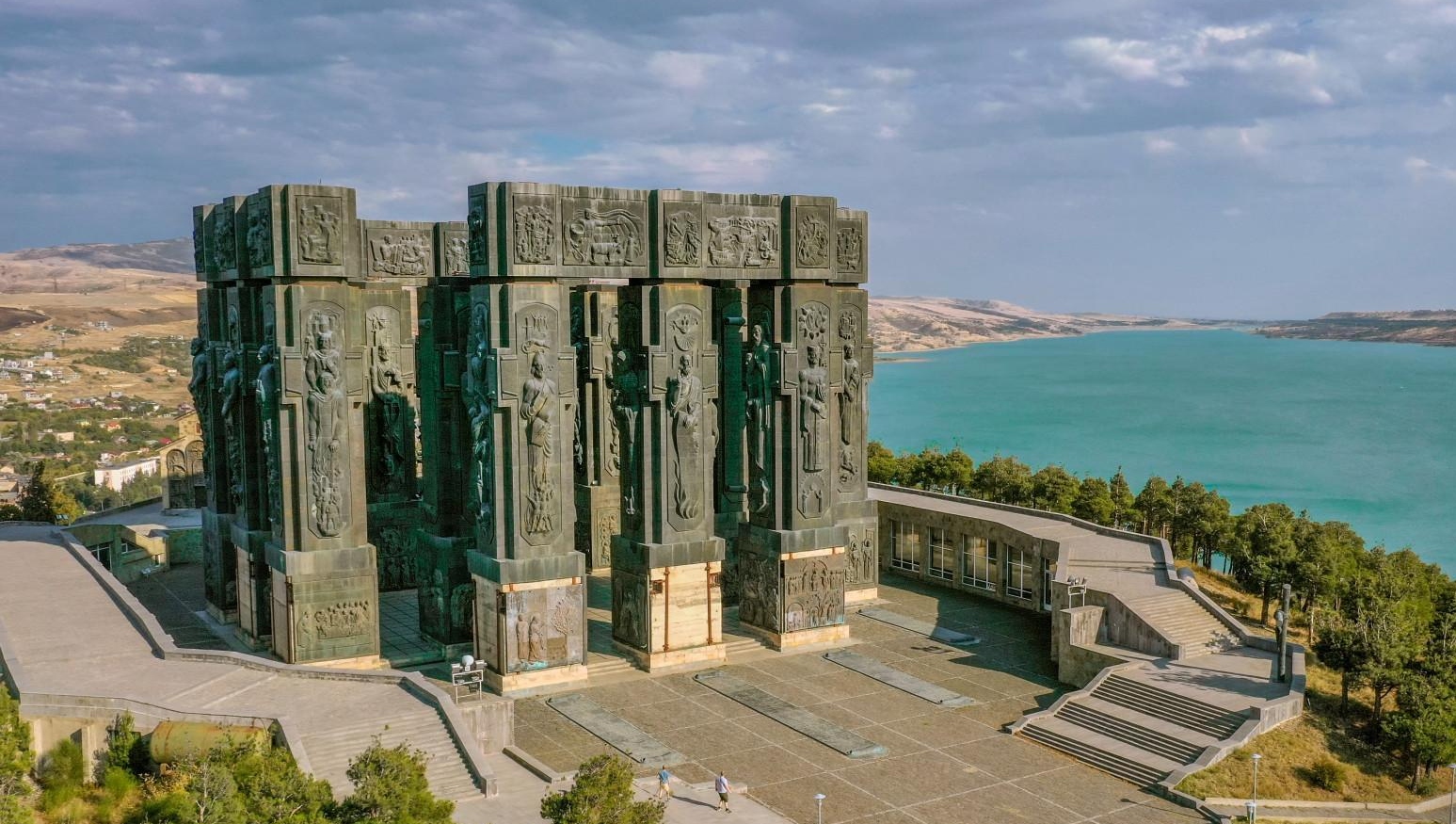 The Holy Trinity Cathedral is the main cathedral of the Georgian Orthodox Church and one of the most popular places to visit in Tbilisi. It is, in fact, one of the tallest Orthodox cathedrals in the world. Construction only finished in 2004 and the aim was to celebrate the 2000 years of Jesus’s birth and the 1500 years of the autonomy of the Georgian Orthodox Church when the Patriarch (their version of the Pope) didn’t report to any higher authority.

The interior is dominated by religious paintings and the dome is particularly impressive. It’s better to visit during mass, since the actual ritual is very different from Catholics and other Christian denominations, but avoid photographing people as they’re praying. 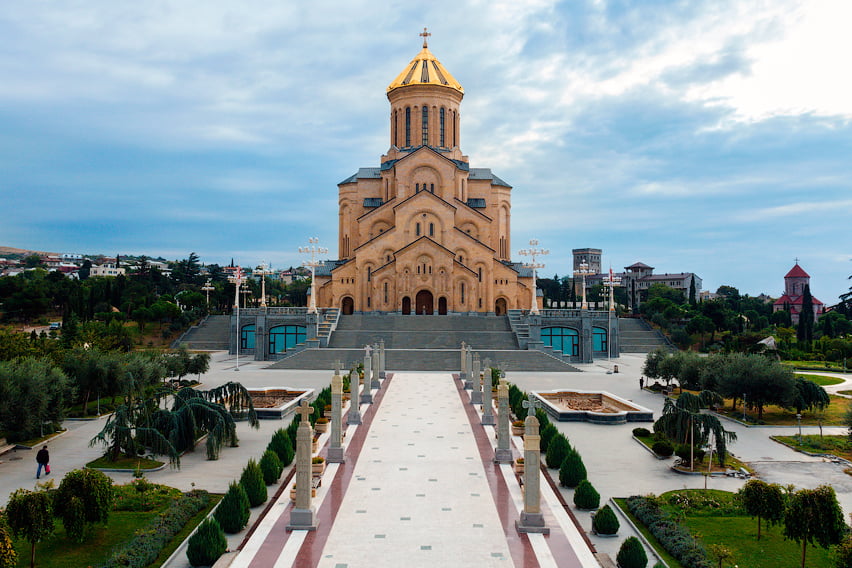 Tbilisi Ethnographic Museum is an open-air museum just on the outskirts of the city, near the Vake district. Few foreign tourists come here, but it is one of the most interesting places to visit in Tbilisi.

It is a place to learn about the many cultures and ethnicities that make the Georgian nation. The Open-Air Museum is located on 52 hectares of land covered by lush vegetation and displays thousands of objects collected from all over the country. 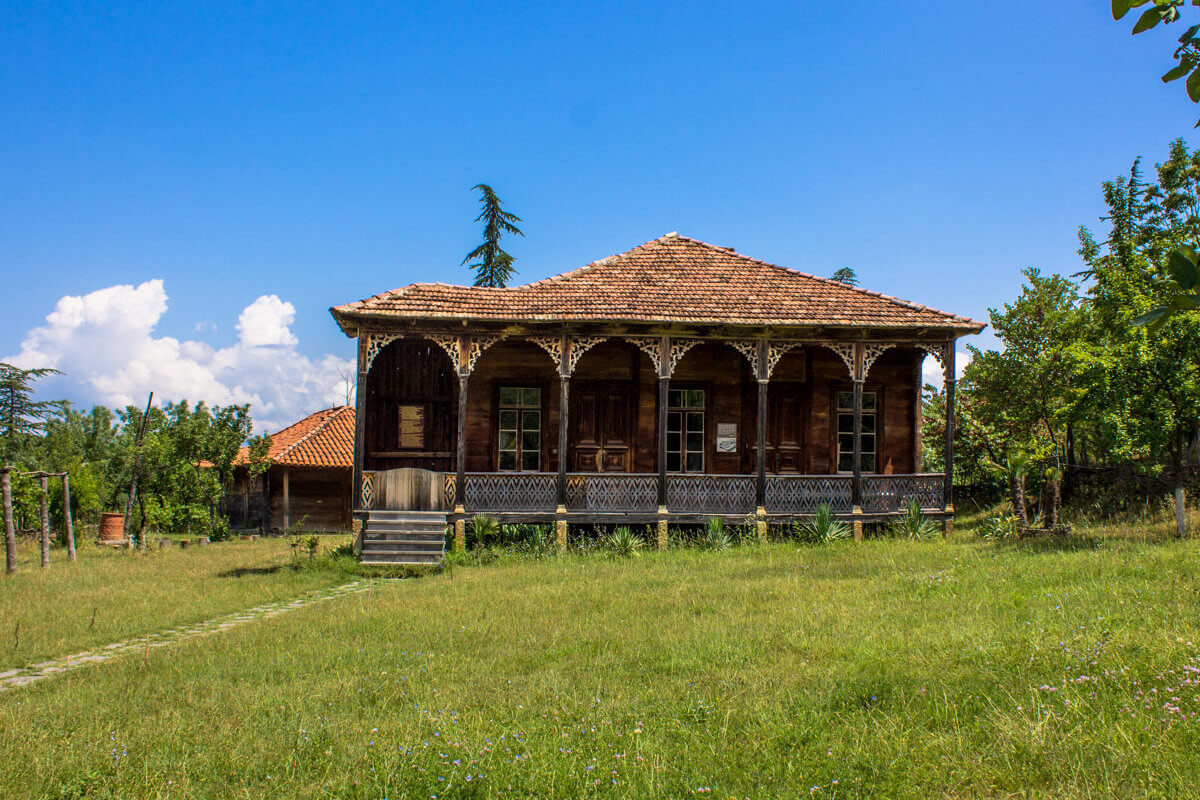 The main attractions are the traditional houses from different areas in Georgia, including regions like Svaneti, Kakheti, Imereti, and Ossetia, to name just a few. The museum is one of the more interesting but less-visited Tbilisi attractions.

Suggested to read: Winter in Georgia. Where to go in Georgia in winter? 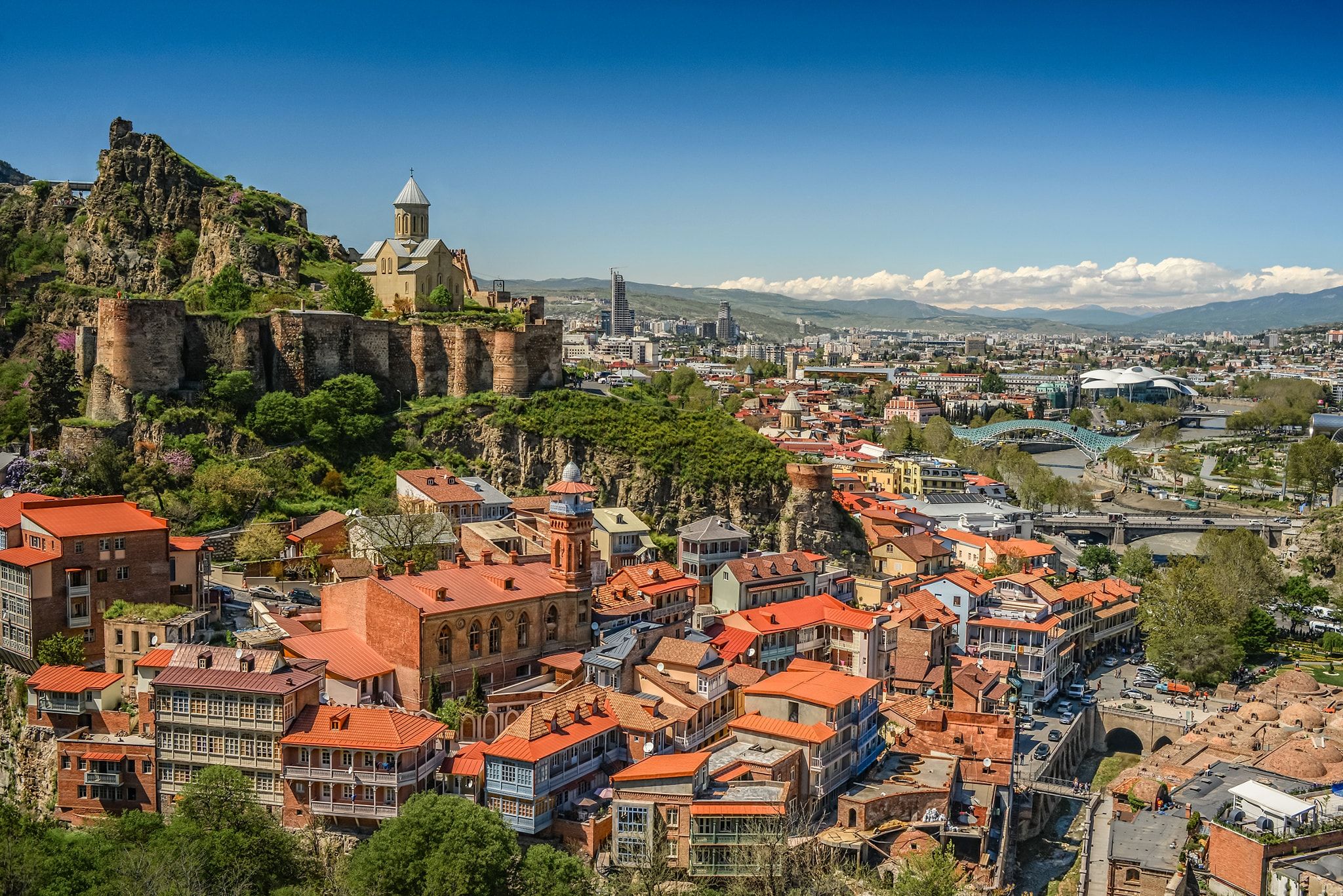