Georgia is stunningly beautiful, amazing, fabulous, so diverse, and extremely hospitable. What to see in Georgia and where to go in this beautiful country in the Caucasus?

Georgia is a small and very ancient country in the western part of Transcaucasia, located on the eastern coast of the Black Sea. It has long been attracting tourists from different countries. With each year the flow of tourists only increases. And this is quite understandable. 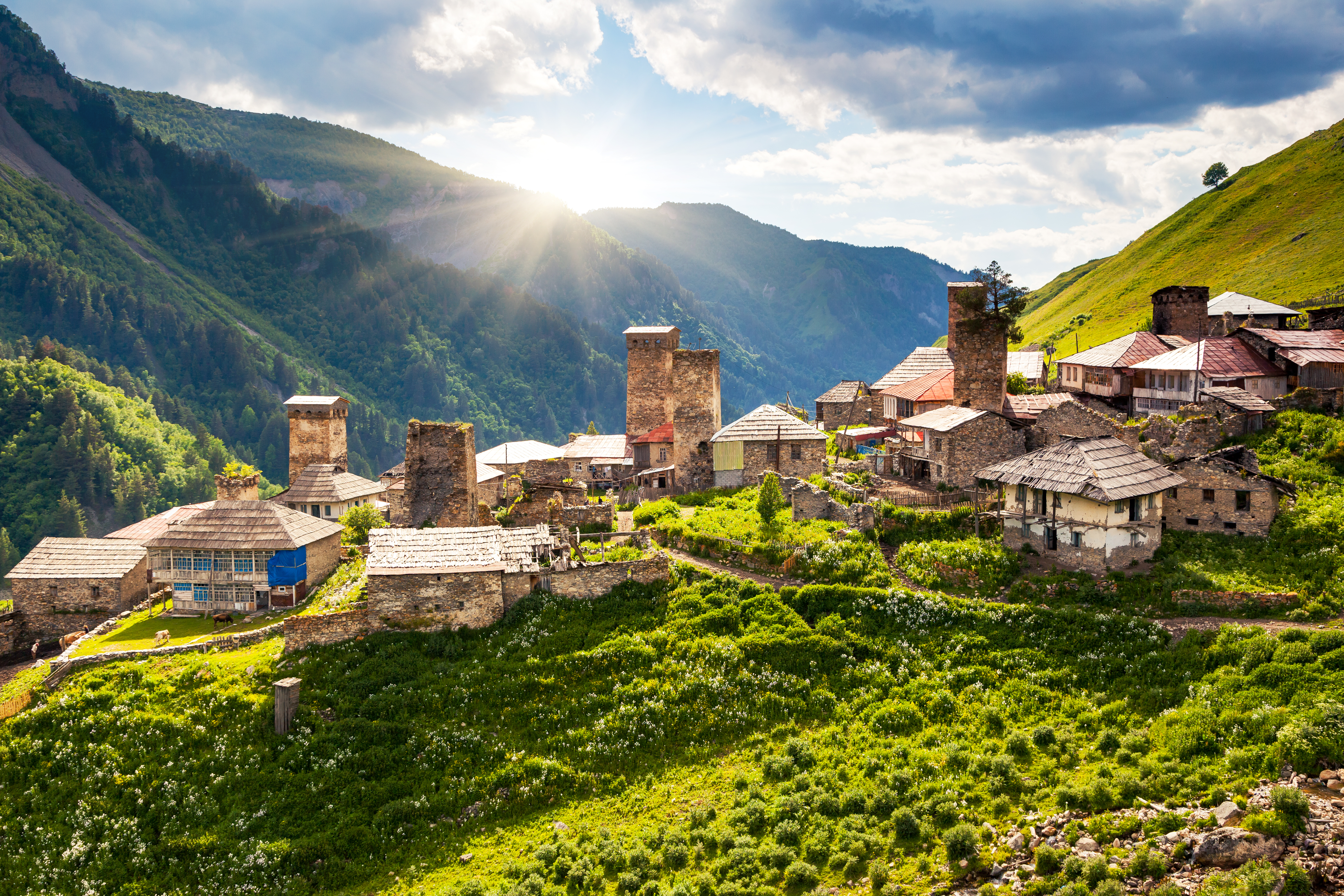 Georgia is stunningly beautiful, amazing, fabulous, so diverse, and extremely hospitable. Sakartvelo - so affectionately called their beloved country, Georgians. They fill everything with love for their beautiful country: fiery dances, soulful multivoiced songs, poems and paintings, the attitude towards the insanely beautiful nature, and the monuments of such an ancient culture, traditions, and national colors.

This country will charm you with its centuries-old secrets, the hospitality of the natives, the rich cuisine and incomparable nature. 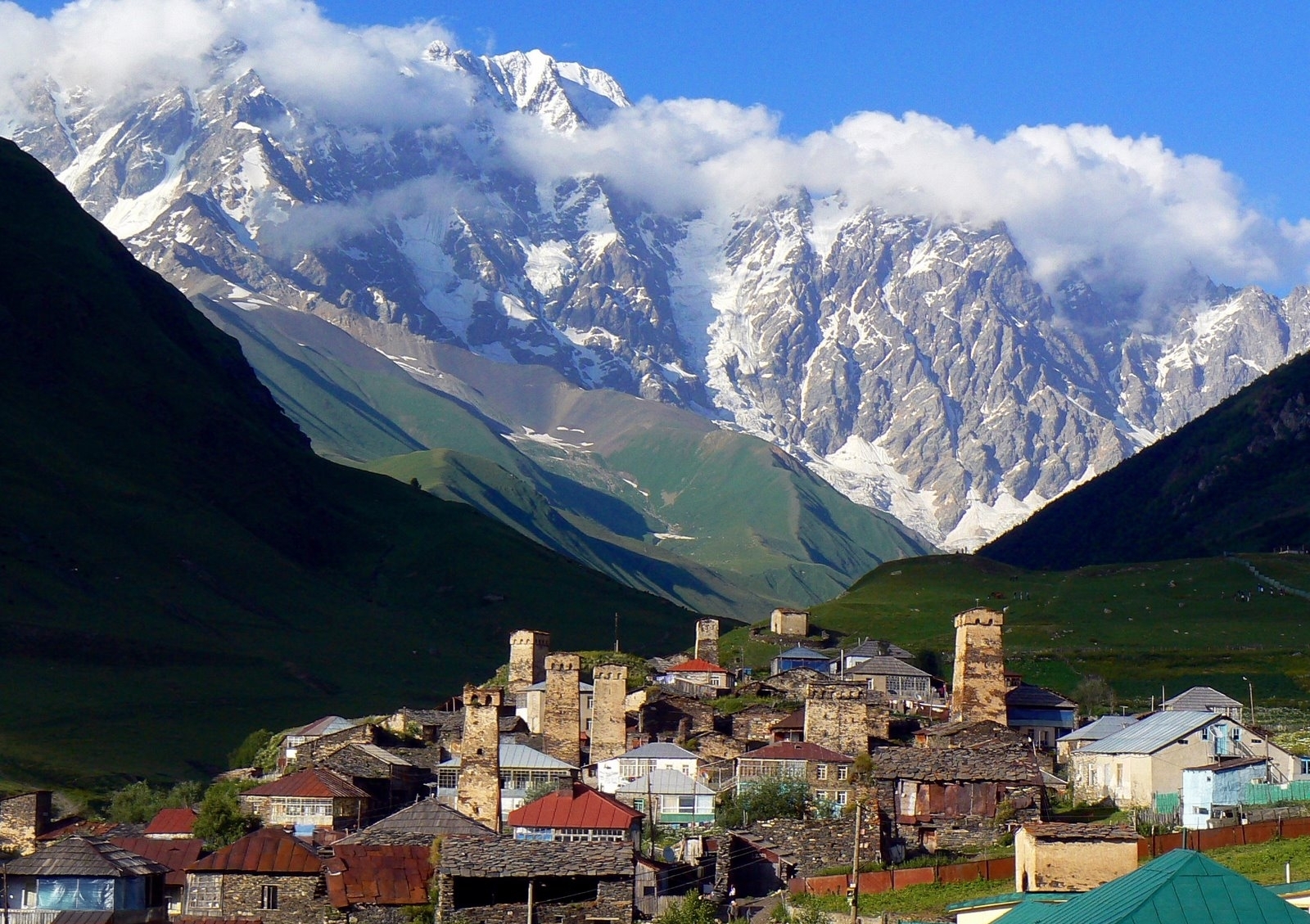 Tbilisi is the capital city and one of the best cities in Georgia to visit! Tbilisi lies on the banks of the Mtkvari (also known as the Kura) river and is surrounded by hills and mountains.

Tbilisi is a beautiful and atmospheric city. The sights are quite compact, but take at least two full days to see them, so you can enjoy it and not run around at a gallop. 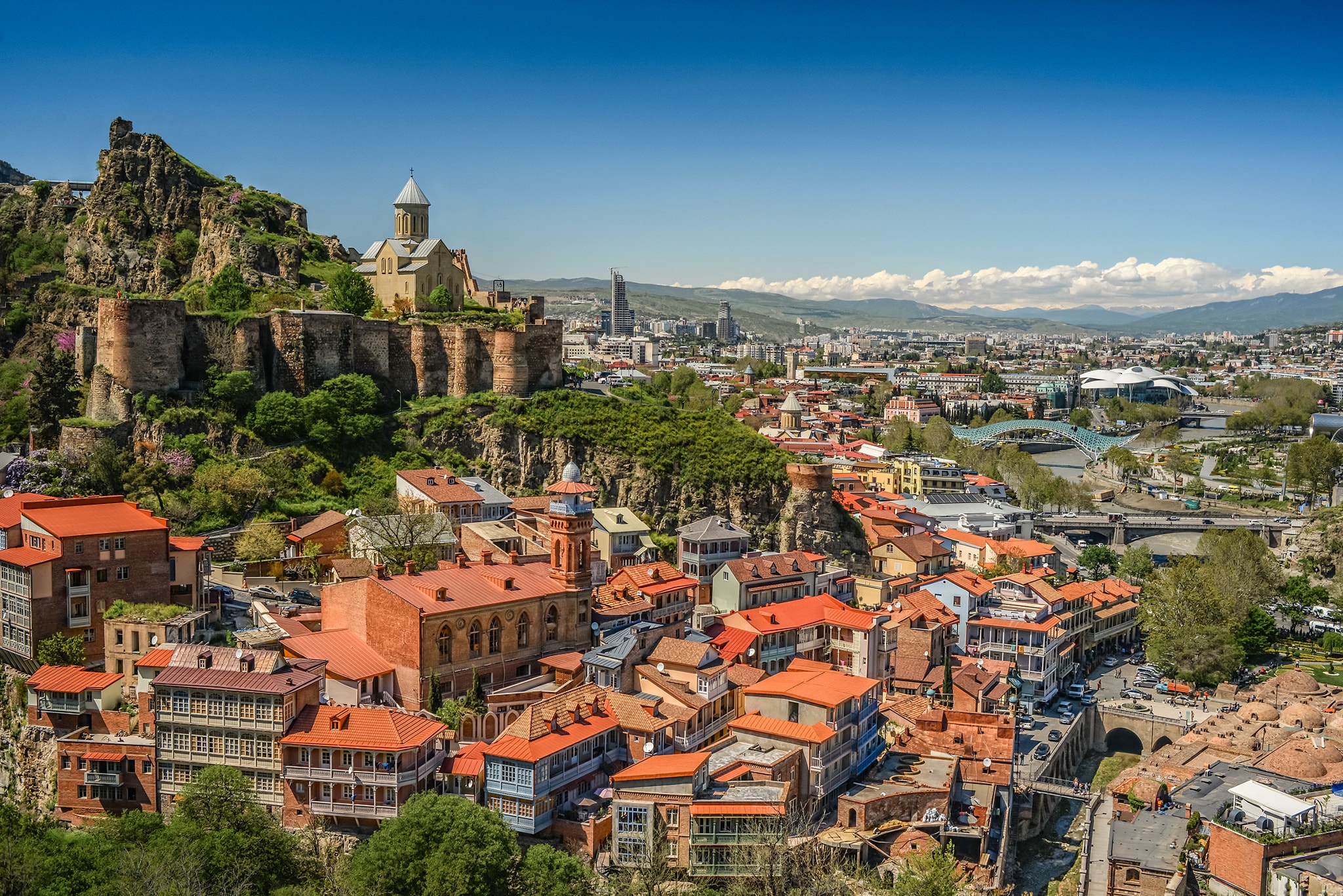 Cascading down the northern edges of the Greater Caucasus Mountains, the Tusheti National Park is the historic home of the eponymous Tush peoples. It’s also breathtaking in the extreme; big on relief and made up largely of soaring peaks and grass-clad hills. There are few roads insight, and the villages that can be found nestled amidst the misty mountaintops are historic, brick-built affairs like Dartlo, which can be seen protruding almost organically from the Georgian lands, encompassed in rural sheep farms (the region is particularly famous for its wool and cheeses) and swathes of spruce forests to boot. 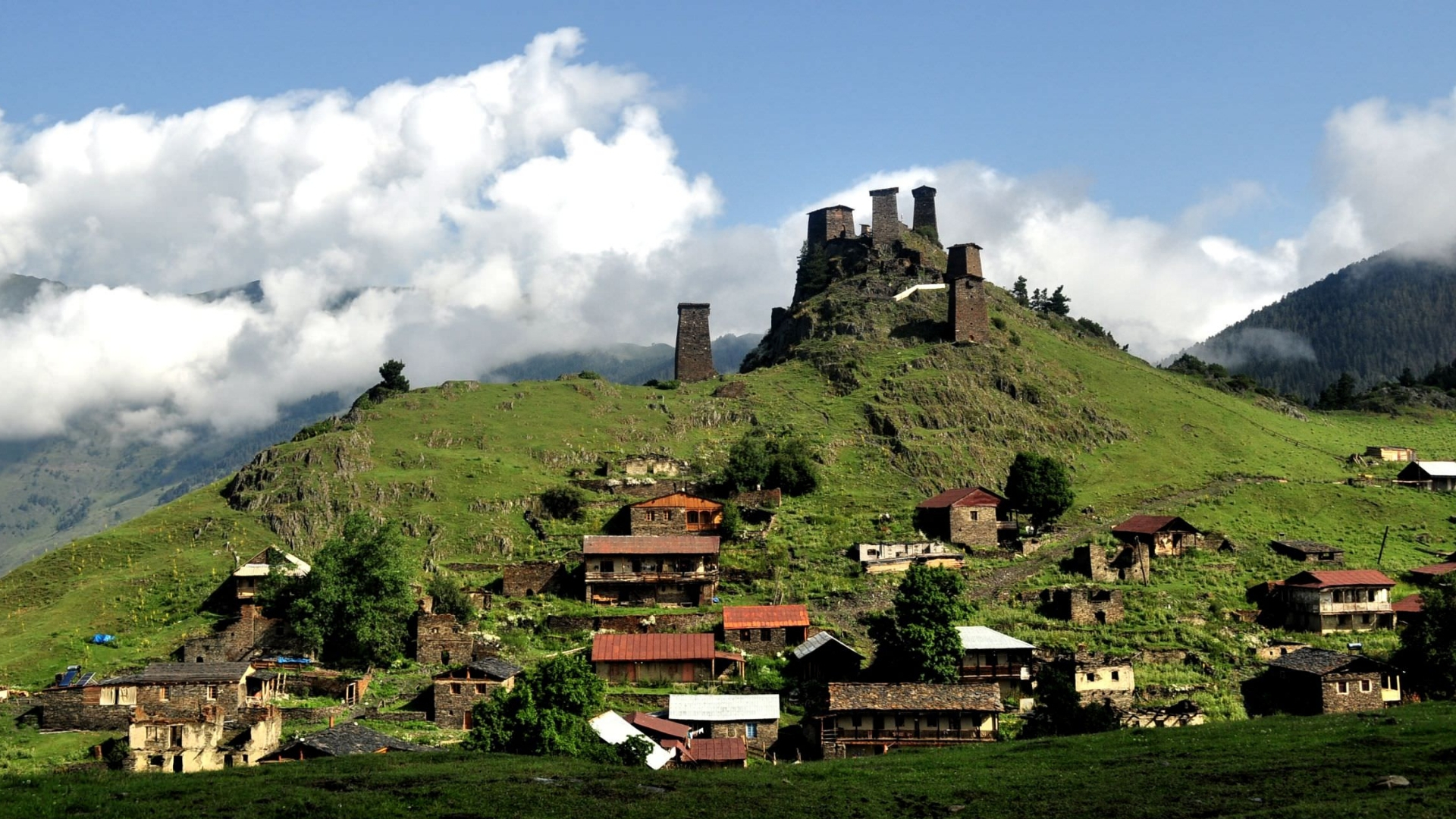 Vardzia is a spectacular cave monastery near Aspindza in southern Georgia. It looks like one of the movie sets of Lord of the Rings, although it wasn’t the home of dwarves but of many monks.This underground monastery was built in the 12th Century, under the reign of King Tamar, the first woman that was ever crowned as a king (not a queen!) in Georgian history. It used to be completely hidden until a severe earthquake exposed and destroyed the cave monastery.

Recommended to read: Winter in Georgia. Where to go in Georgia in winter? 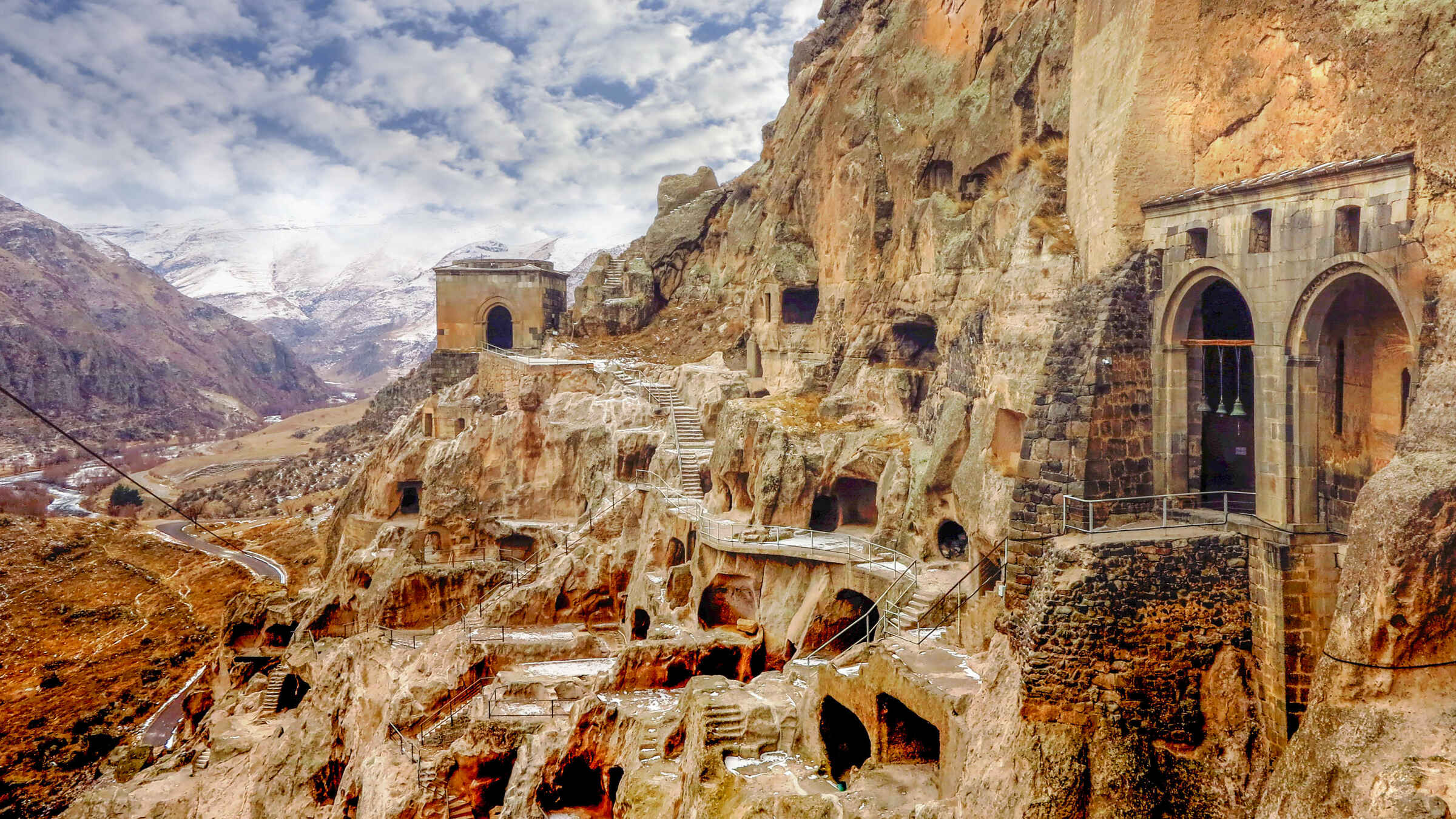 Situated just a short ride out of the capital of Tbilisi, UNESCO-attested Mtskheta clutches the low-lying banks of the Aragvi River confluence. Hailed for its countless Christian sites and importance as one of the nerve centers of the Georgian Orthodox Church, the town draws huge crowds throughout the year. They come to see the beautiful rises and magnificent frescoes of the great Svetitskhoveli Cathedral, which stands as one of the finest examples of medieval Georgian religious architecture and a revered pilgrimage site for Georgians right across the country, or the Jvari Monastery on the hill, soaring high above Mtskheta – a curious mix of tetraconch architecture, Hellenistic, Byzantine and Georgian styles hidden between its apses.

Uplistsikhe is located in eastern Georgia, about 100 km from Tbilisi. It literally means “Lord’s Fortress” and it’s an abandoned rock-hewn town that is more than 3000 years old.

It was founded around 1000 BC and was continuously inhabited until the 13th century AD. At one point Uplistsikhe even had 20000 inhabitants!The cave city covers an area of almost 40.000 m2 and used to have a pharmacy, a bakery, an amphitheater and even a prison. All the structures are connected by tunnels.On top of the whole complex is a church that was built in the 9th century. This colorful building sticks out against the gray and sober caves. 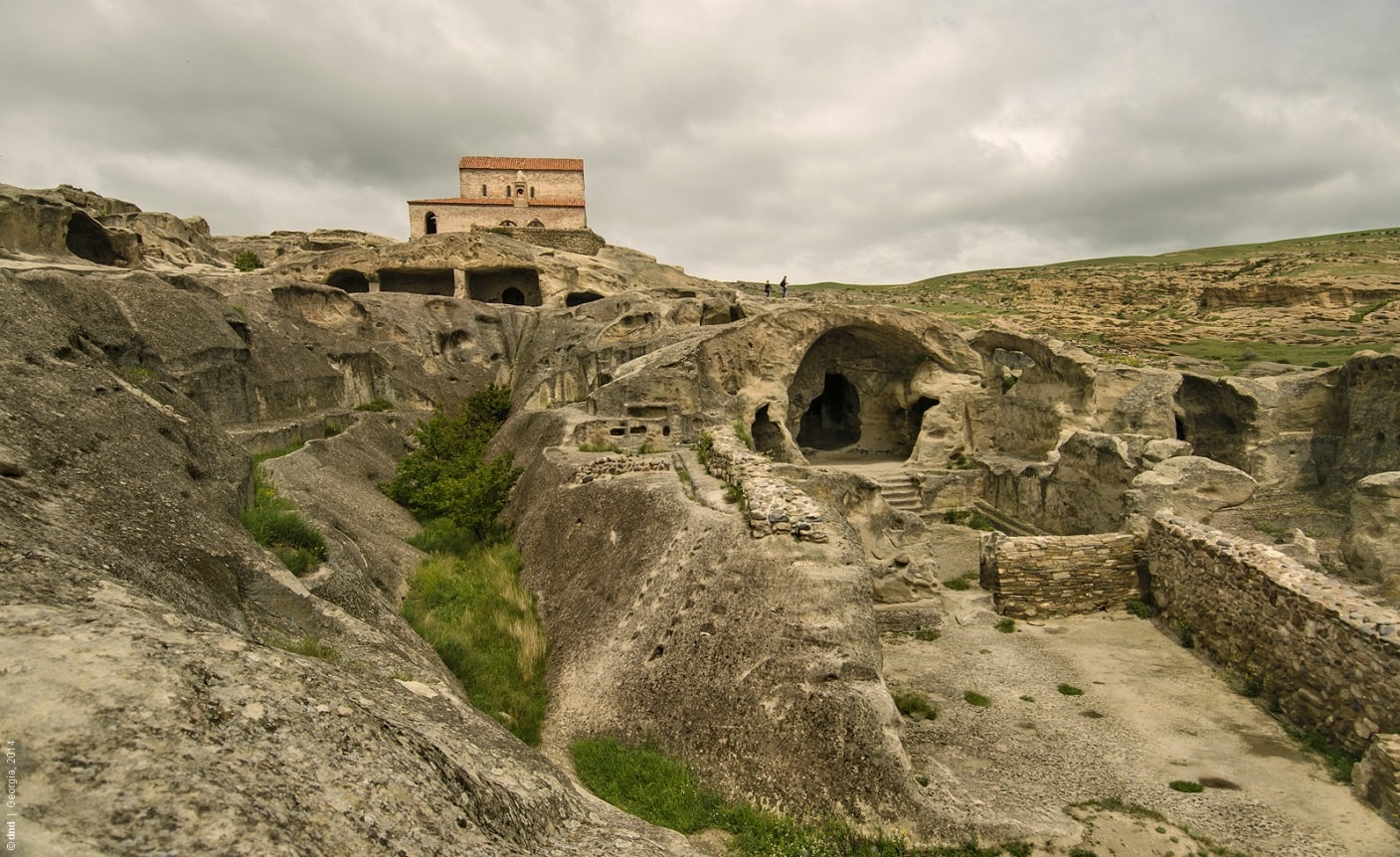 The homeland of most famous Georgian wines, where even the road signs proudly say: "Tsinandali", "Gurjaani", "Akhasheni", "Mukuzani". It takes an hour to get to Kakheti from Tbilisi, so you can leave in the morning to visit key places, and by the evening to get back to the capital.

In Kakheti you should definitely visit Sighnaghi, a lovely town with nice houses, funny monuments and a wonderful view of the Alazani Valley. If time permits, visit the regional capital, Telavi, the majestic Alaverdi Cathedral and the ancient cave monastery of David Gareja near the border with Azerbaijan. 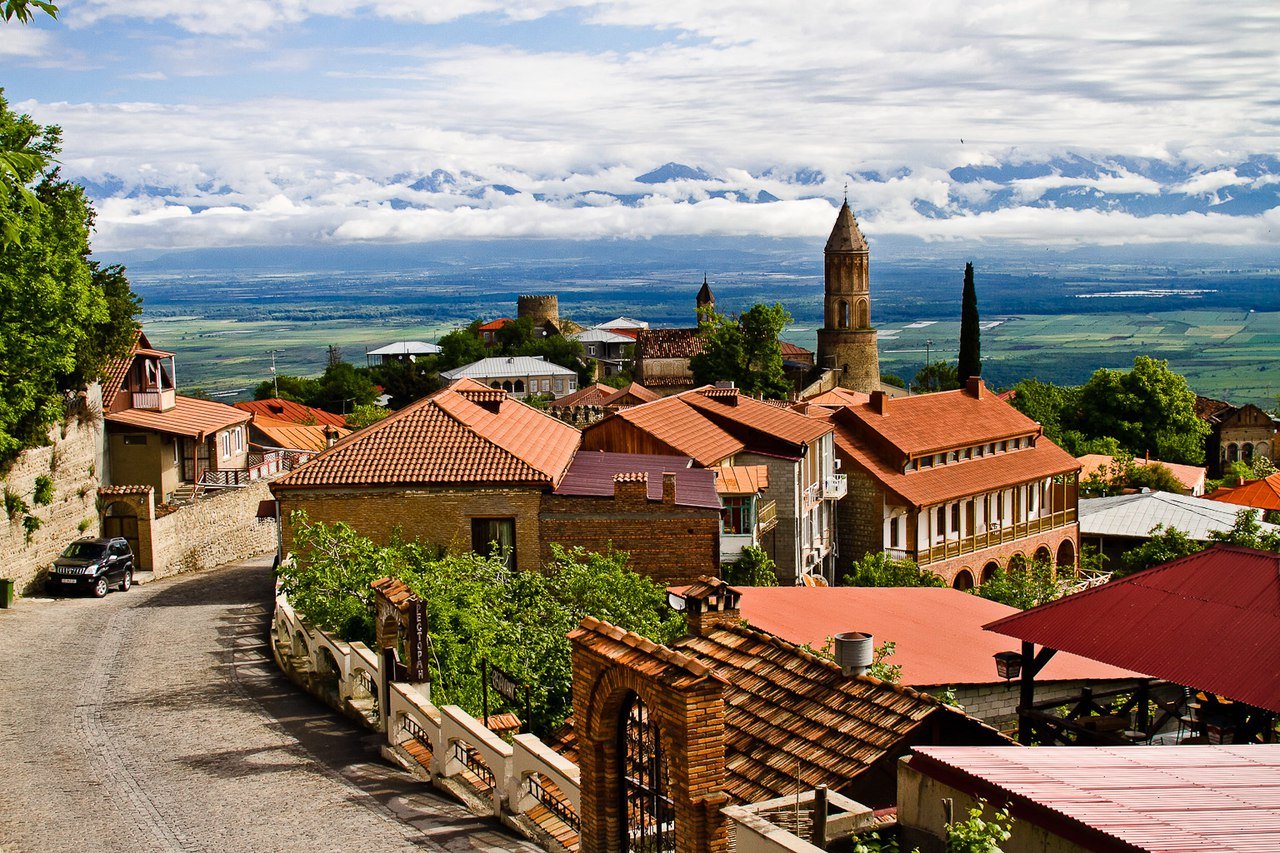 Shrouded by the snow-mantled peaks of the Greater Caucasus Mountains, deep in the legendary lands of Svaneti, the various hamlets and dabas (small historic towns) of Mestia rarely fail to draw a gasp. They are instantly recognisable thanks to their stone-clad, square-cut Svan towers, which rise majestically from between the groves of chestnut and birch here, oozing with centuries of Georgian history and culture. 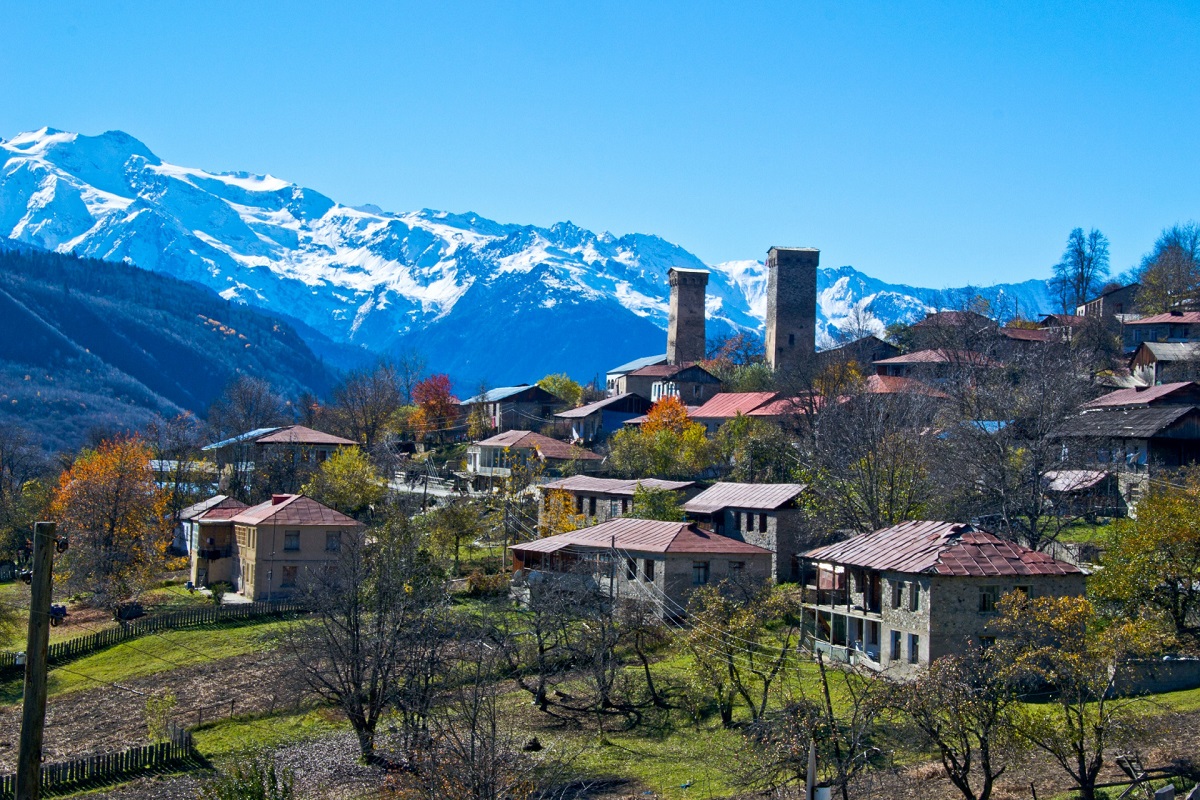 Today, this ancient cluster of UNESCO-tagged villages is really on the up, with a new airport bringing new guesthouses and more and more people weaving between the striking architectural pieces of Lekhtagi and Lagami (two of the most attractive small centers). Others come to hit the Chalaadi glacier and hike the trails to massive Mountain Ushba in the distance. 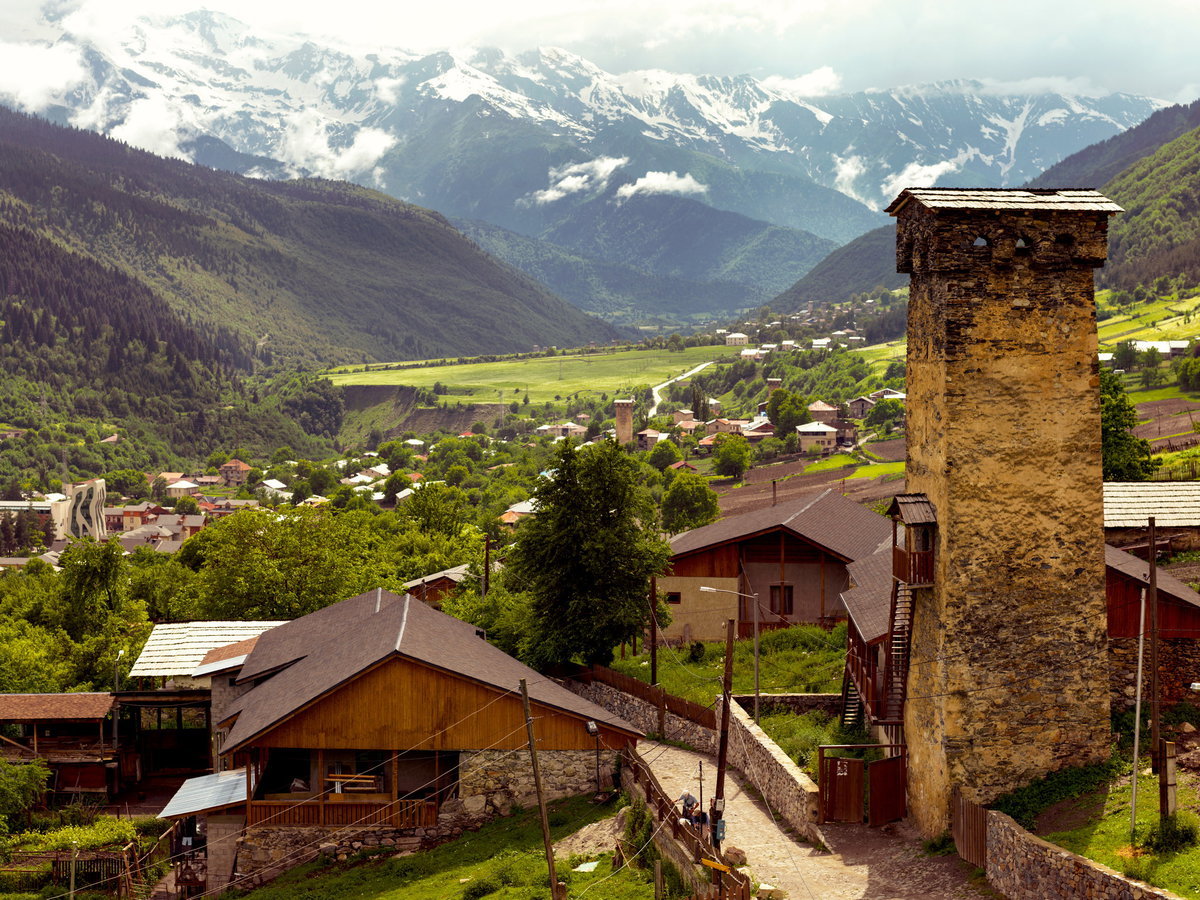 First-time travelers to Georgia could be forgiven for thinking that the shimmering waters of Lake Ritsa, set deep in a valley of the Caucasus Mountains and surrounded by verdant dashes of Buxus and Nordman firs, had been plucked straight from the Austrian Alps or the Rockies of British Columbia. But no, this picture-perfect alpine retreat between the mountains of Abkhazia (a separatist section of the country that buts up to the Black Sea in the northwest) really is in Georgia. The lake and the surrounding forests are great for hikers looking to delve into one of the less-trodden natural reaches here, while boating and wild swimming in the icy waters are also favorite pastimes. 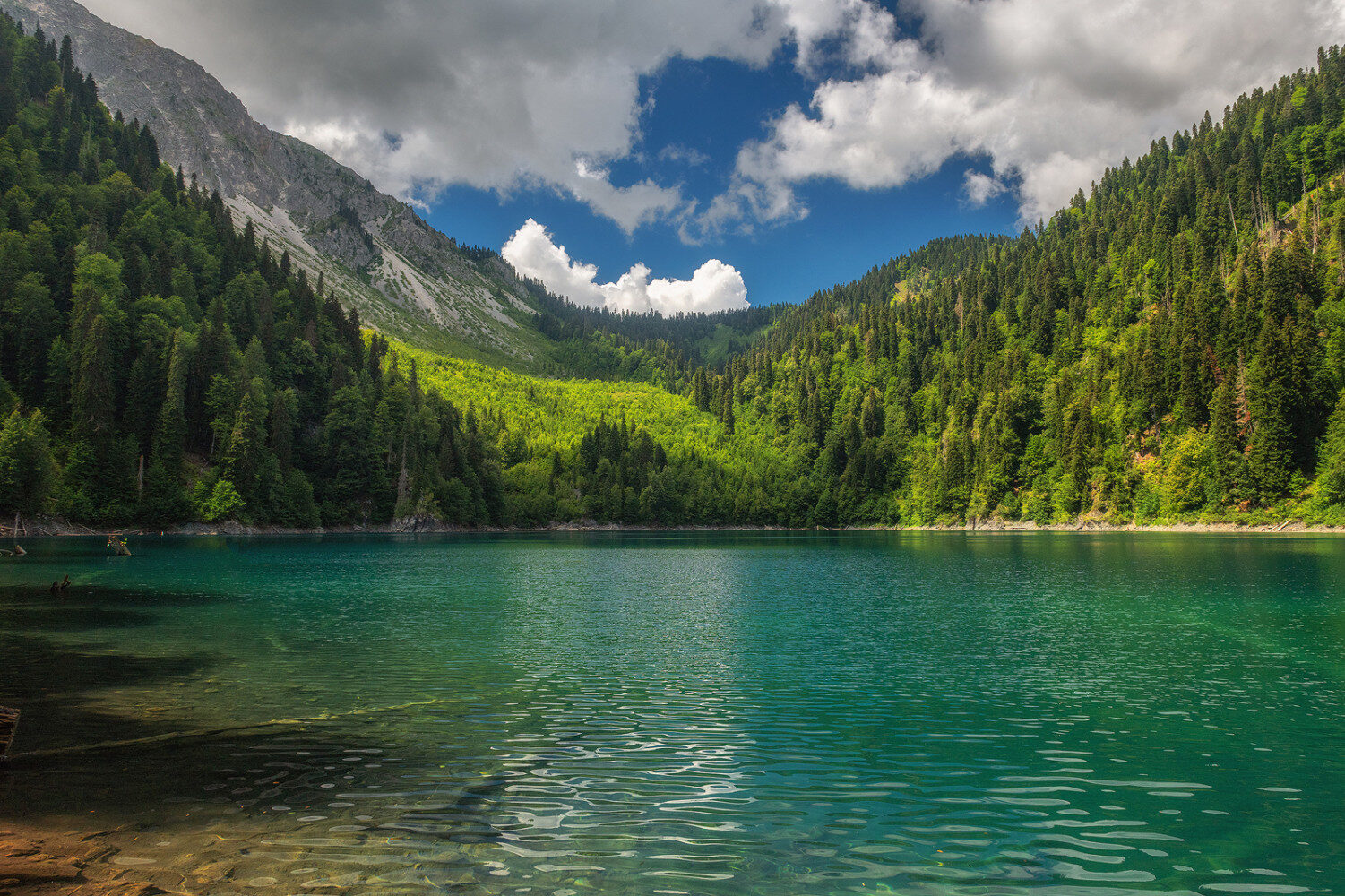 Prometheus Cave near Kutaisi, discovered in 1983, is located next to Sataplia Reserve, where there is also a smaller cave and dinosaur footprints. It is a very spectacular place. Inside the cave with beautiful lighting, huge stalactites, and it will leave indifferent neither adults nor children. You can even take a boat ride on the underground lake. 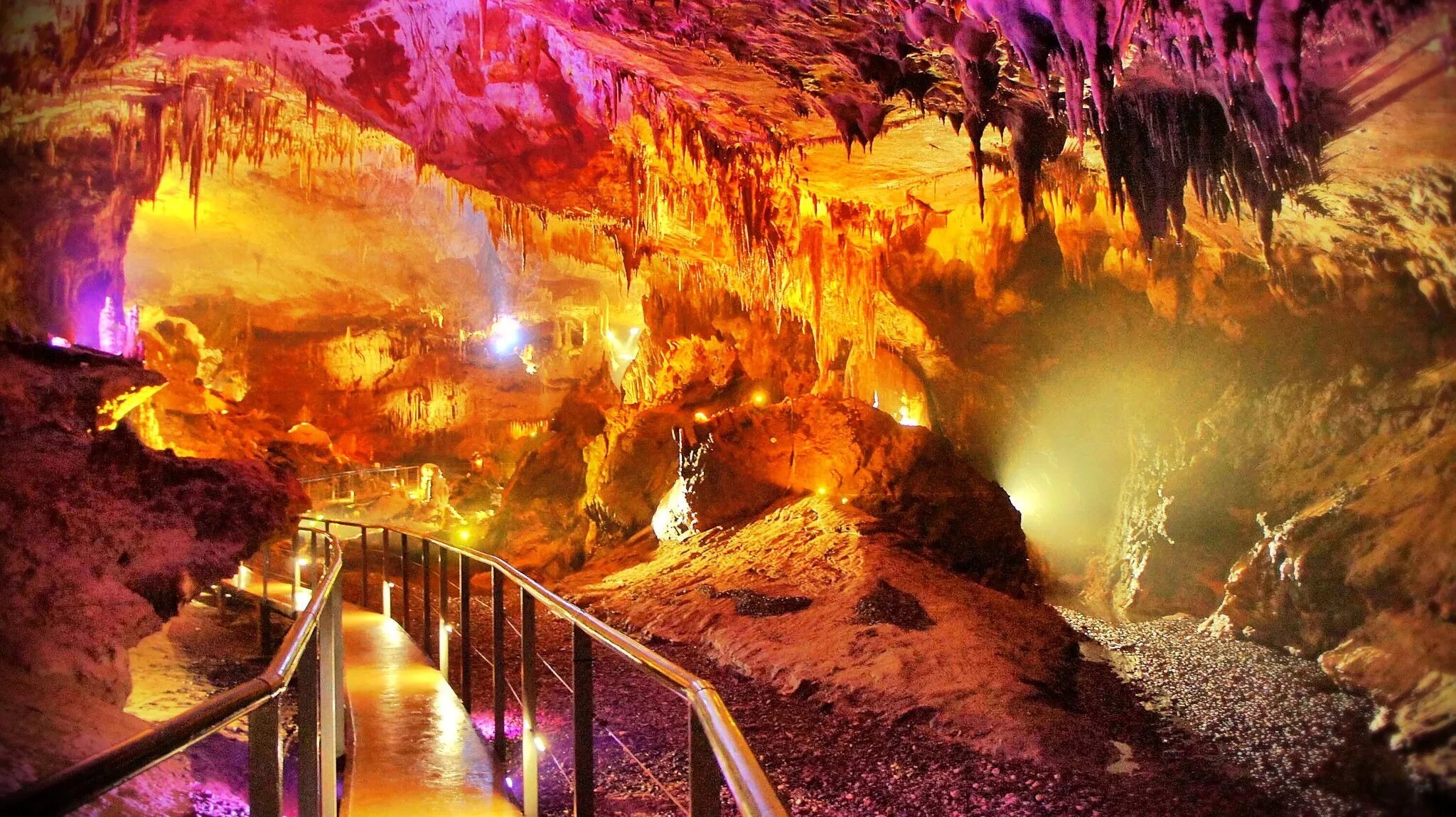 Another point of interest in Georgia is Chiatura, a small town nestled between steep valleys and deep gorges. 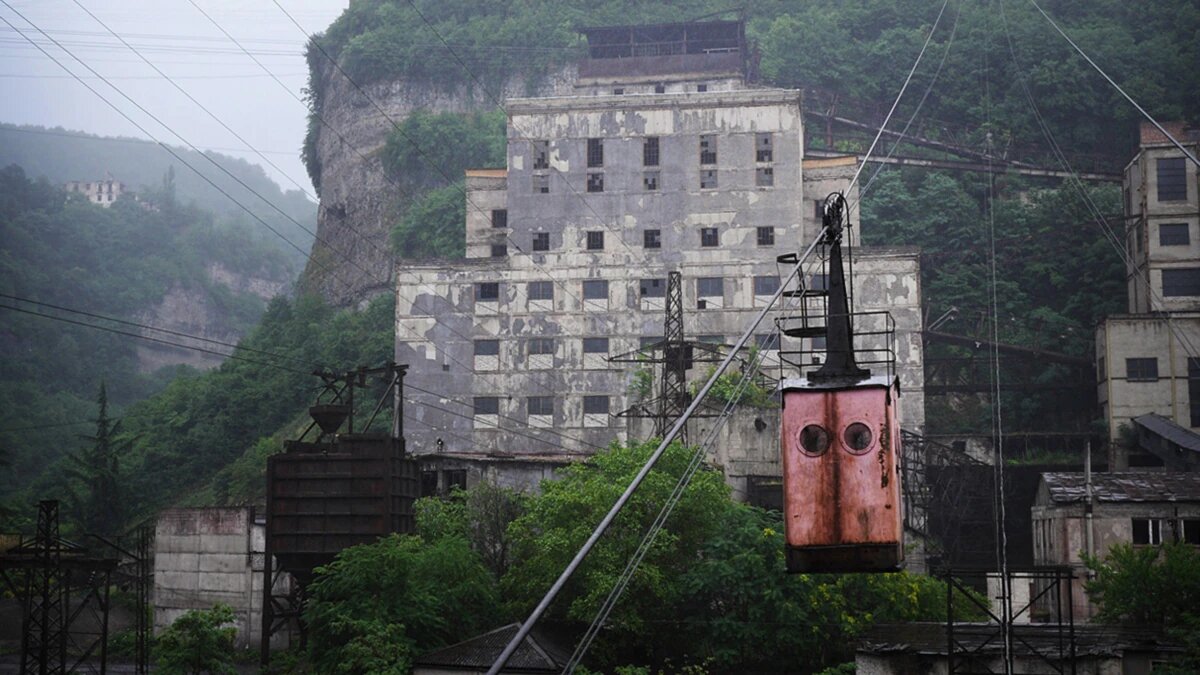 Chiatura was founded in the late 1800s as a mining colony. In 1954 the Stalinist government installed a system of cable cars, also referred to as a “rope road” to get the workers more quickly to the mines, instead of them walking to the sites on the steep cliffs. Every corner of the town was connected with the mines through these cable cars and Chiatura became known as “the cable car city”.Most of these cable cars have rusted away but there are still some of these “air tramways” functioning today as a form of (free) public transportation. It’s truly an amazing (and a little frightening) experience to step into these rusty flying cabins that are known as the “death-defying metal coffins”. Chiatura is a strange and charming city where you can still feel the ghost of the Soviet Empire. 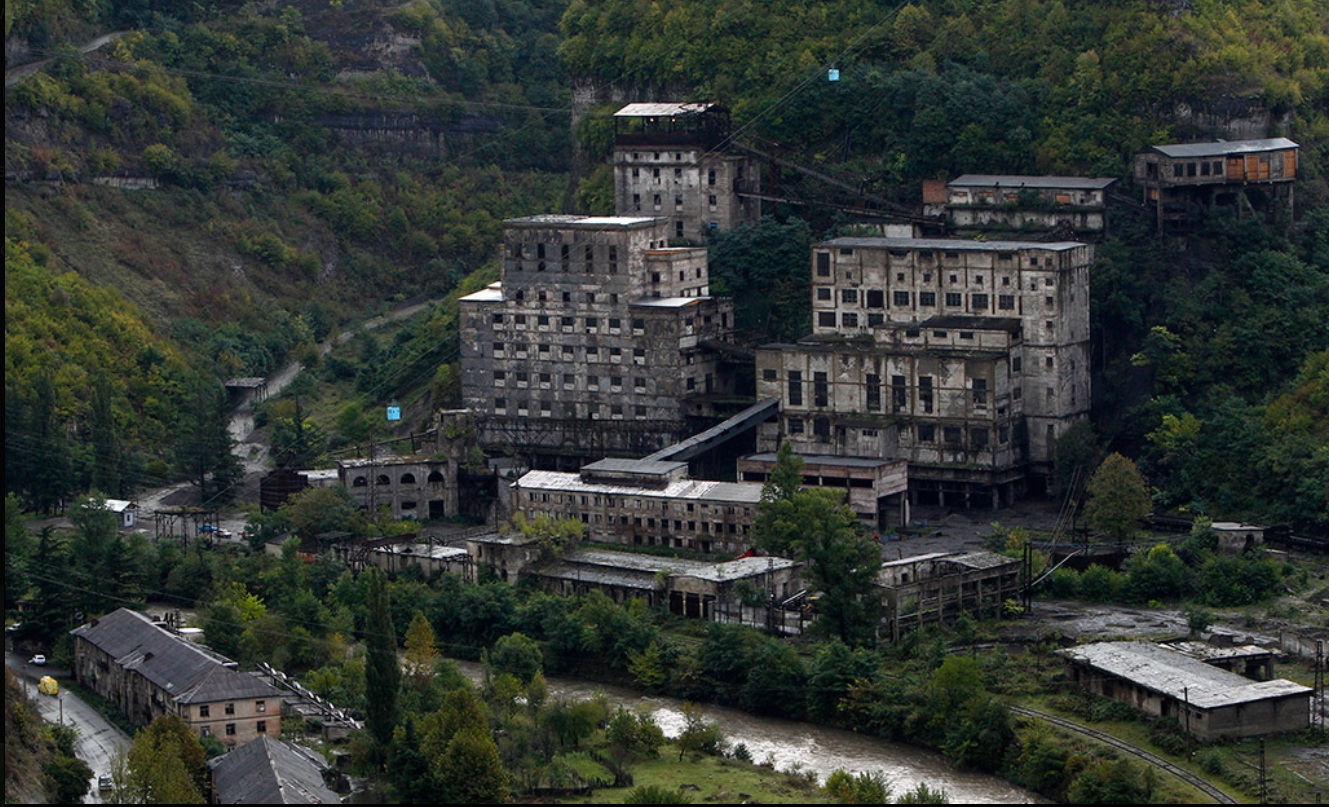 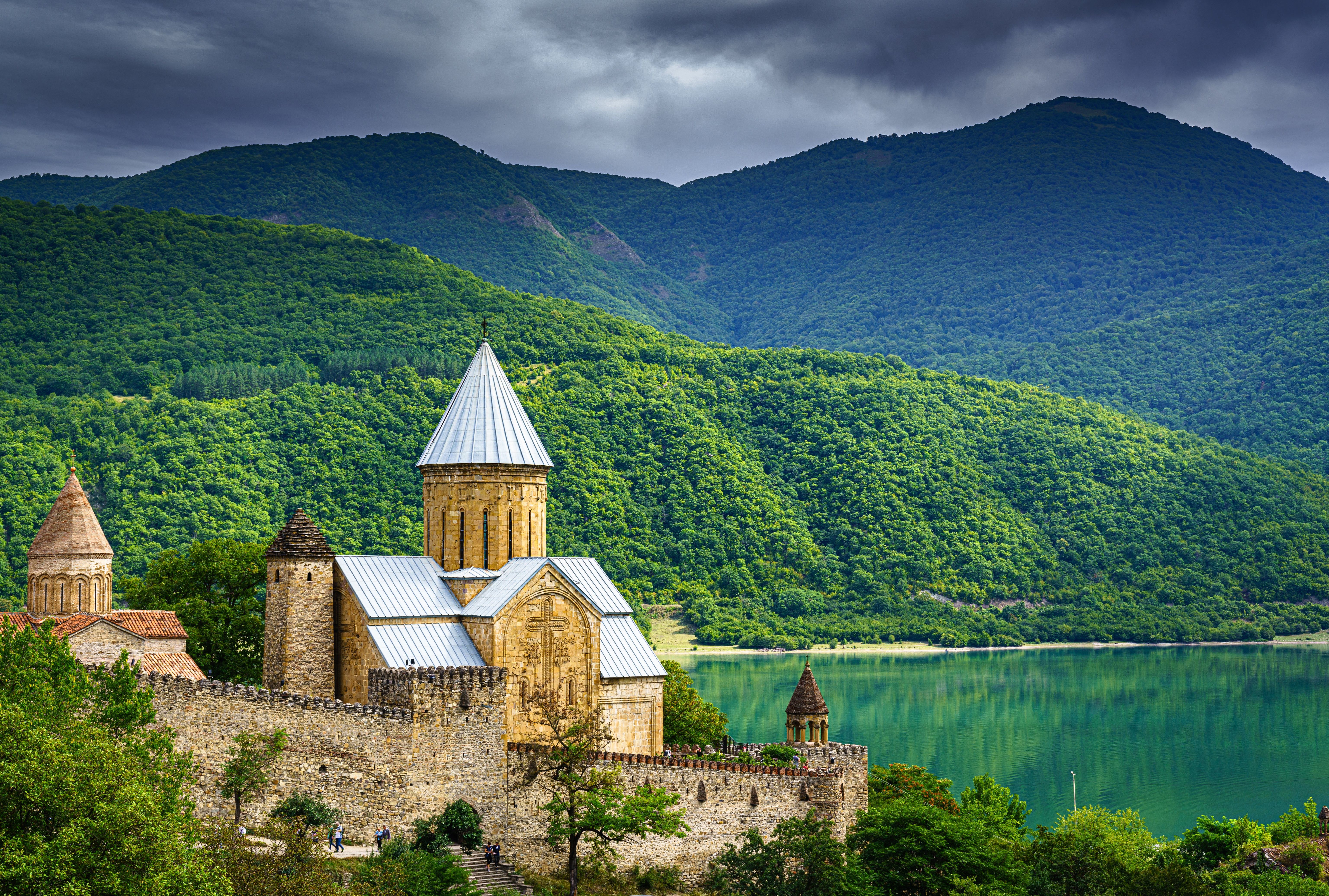